At the end of the month, the world will get its first look at the 2023 Lexus RX. Lexus posted a teaser image of its most popular model today, announcing that the next-generation SUV will debut on Tuesday, May 31 at 8 p.m. EST.

The image released by Lexus features a close-up of the front of the new RX. The brand’s spindle grille is still very much alive, with the latest version combining a predominantly black mesh design with a partially blocked, off-white panel at the very top. The reformed headlamps have a familiar light signature with a check mark, but the headlamps themselves are shrouded in darkness. The prominent air intake on the edge of the front bumper suggests that this teaser image could be of an F Sport variant. 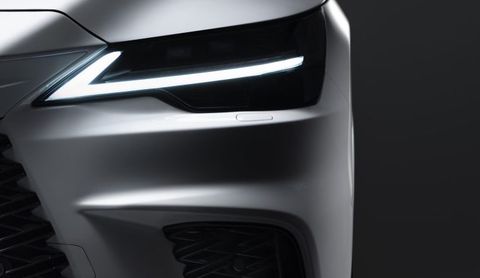 Since Lexus has only released this one photo, we’re in the dark about what the rest of the next-gen RX will look like and what features and powertrains will be offered. Still, we can make educated guesses about the last two. The ’23 will certainly be offered with the massive 14.0-inch touchscreen infotainment system that debuted on the 2022 Lexus NX and will be available on the upcoming electric Lexus RZ. While the current generation of the RX is available with two or three rows of seats, we’re not sure if the replacement will offer both configurations as well.

As for what’s under the hood, we expect the entry-level RX350 to have the turbocharged 2.4-liter inline-four that also powers the NX350. In that application, the engine is rated at 275 horsepower and 317 pound-feet of torque and pairs with an eight-speed automatic transmission. We also expect a hybrid variant called RX450h. Finally, we think the RX lineup will welcome a plug-in hybrid. Toyota applied for the RX500h trademark about two years ago, and since Lexus’ PHEV models are labeled with a “+” at the end, we think the plug-in variant could be called RX500h+.