The takeaway: Toyota’s 2023 Sequoia has been completely redesigned for its third generation. It shares quite a bit with the tundra now, but that’s not really surprising – or bad – since both are built on the same production line in San Antonio, Texas. First and foremost, the SUV named after a large tree now has the same twin-turbocharged I-Force Max Hybrid powertrain as the Tundra. Together with the new engine, the renewed interior makes the Sequoia a real competitor in its segment. We flew to Plano, Texas, for Toyota’s annual HQ Confidential media drive to log some time behind the wheel.

What you should know

Matching a car named after a huge tree, the Sequoia is a hefty brute with a decent presence. It remains a robust vehicle that can go anywhere and can do almost anything. And it is. Traditionally, it followed the tundra way in terms of appearance and even mechanical underpinnings. The vehicle from 2023 is no exception.

The Sequoia’s exterior has the same angular aesthetic as the tundra; if you weren’t wiser, you’d think it could very well be a tundra with a bed cover. The biggest differentiator is the air dam under the front bumper on non-TRD Pro models. The front row of the interior is much the same story, with nearly identical switchgear and infotainment. However, the second row now gets captain’s seats, behind which is an electrically folding third row.

The pricing structure is where the Sequoia really sets itself apart from the Tundra. While the lineup largely follows the same structure, with a base SR5 and a top-of-the-line Capstone, the Sequoia is slightly more expensive. See below for the full breakdown.

Smooth and balanced on the road

For 2023, Toyota ditched the previous second-generation Sequoia independent rear suspension and opted for a solid rear axle instead, making it one of the few body-on-frame SUVs in its segment with such a solid rear axle. Many enthusiasts assumed that this would make the vehicle as rough as old bolts on the road. This couldn’t be further from the truth, though, as the Sequoia’s suspension is buttery soft. Driving on the road feels a bit like powder skiing; the body rolls around a bit, but once the tires bite, changes in direction feel sharp.

Toyota purists can rejoice that the previous-generation 5.7-liter V8 — which suffered from transmission and water pump failures and oil leaks (among many other issues) — is gone and replaced with the same I-Force Max- hybrid under the hood of the Tundra. Although here all trim levels are standard with the hybrid as opposed to the tundra. With 437 horsepower and 583 pound-feet of torque, the Sequoia can boogie when you put your foot down. Toyota hasn’t released fuel economy figures yet, but I measured 20 miles per gallon as I drove about 80 miles of pockmarked country roads and highways on a test drive near Toyota’s headquarters in Plano, Texas. 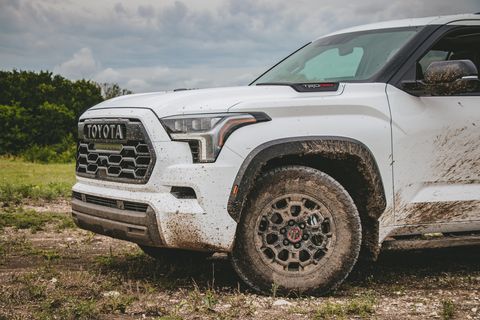 On the road, the Sequoia is now a worthy competitor to vehicles like the Chevrolet Tahoe. However, the Sequoia takes the cake when it comes to off-road capability. With access to the entire range at Toyota’s headquarters in Plano, I was able to try out the TRD Pro variant – Toyota’s crème de la crème of off-road equipment.

Being a TRD Pro, the vehicle arrives with all the off-road goodies imaginable for such a rough and tumble machine. This includes TRD-tuned Fox off-road suspension, 1.4-inch-thick skid plates, a rear differential and multi-terrain select along with creep and descent control. In terms of aesthetic adaptations, the Sequoia follows the path of the tundra; it gets heavier TRD Pro wheels (made by BBS) along with camouflaged splashes around the fenders and more aggro styling throughout.

The highlights of the TRD Pro are the Falken Wildpeak all-terrain tires and the Fox suspension. And that’s not all that surprising. When it comes to off-roading, suspension and tires are some of the best adjustments to start with. Unfortunately, the off-road track that Toyota had designed for us had turned into a primeval swamp after a heavy rain shower the day before the ride. But that didn’t stop the Sequoia, who took it all. This isn’t a trophy truck, but the Fox shocks tackled the jumps and other obstacles without a hitch.

Obviously, every TRD Pro vehicle is designed to perform off-road. However, I can’t ignore the elephant in the room: the lack of restore points near the front bumper. While I’ll bet the majority of TRD Pro owners will never take them off-road (a real shame), the decision to leave this road doesn’t make sense for enthusiasts. Anyway, I bet there will be some aftermarket solutions to fix the problem; there was no shortage of Toyota Tundras with solid bumpers (with restore points) at this year’s Overland Expo West.

A striking interior (with an electric third row)

The Sequoia’s cockpit felt familiar after several hours behind the wheel of the new Tundra. By familiar I really mean that both areas are almost identical. Sitting behind the driver’s seat, I couldn’t miss the all-new 14-inch infotainment screen — standard on the TRD Pro model pictured, but optional on the trim levels below. Spoiler alert: The basic 8-inch screen is a bit of a let down.

As infotainment systems go, the optional 14-inch screen in the Sequoia is one of the best I’ve used. After standing in front of quite a few infotainment screens in my time, it just felt like there were just acres of screen real estate. The Toyota development team has also done a fantastic job implementing the vastly improved navigation and control systems. Every inch of space was also well laid out and the user interface really made sense; the minimalist design makes it easy to get to the screen you want quickly without taking your eyes off the road for extended periods of time. Still, I often use Apple CarPlay, and that experience was just as great with so much screen space to work with.

The rest of the TRD Pro interior is expected to be brash – the available red softex seats and upholstery are the reddest I’ve seen in a long time. Like any TRD Pro vehicle, it is also covered with TRD logos to remind you that you are in a premium SUV. That said, all trim levels come with a smart, power-adjustable third row. In addition to folding up and down, both seats slide forward and back for more luggage or more legroom.

I am happy to report that the relationship between Tundra and Sequoia will remain largely unchanged in the next generation. That said, the latter is still much more family-friendly, with a clever third-row seat and luggage solution. Despite the vehicle’s target market, it somehow remains as capable as a Tundra when it comes to off-road capability and on-road comfort. At the end of the day, it offers all things to all buyers. And that’s why it has such a strong reputation in the full-size SUV segment.