The final piece of the LMDh puzzle of 2023 is here. Acura has just released footage of its new sporting prototype challenger, the ARX-06, from its first test at Paul Ricard and Magny Cours in France. The ARX-06 will join the IMSA WeatherTech Series GTP class next year alongside the BMW M Hybrid V8, Cadillac Project GTP Hypercar and Porsche 963.

In many ways, the ARX-06 is an evolution of Acura’s current DPi car, the ARX-05. The chassis is supplied by Oreca, and based on a video released Tuesday morning by Honda Performance Development, it sounds like it uses a V-6, presumably an evolution of the twin-turbo unit in the ARX-05. Acura has also reworked the old car’s signature front wing concept, although the side panels look much more dramatic.

HPD engineer Matt McMurry and Ricky Taylor of Wayne Taylor Racing, who won the 2020 championship in an ARX-05 and is challenging for the title this year, were behind the wheel of the car. Next year, the ARX-06 will be driven by Wayne Taylor Racing and current series leader Meyer Shank Racing.

Like BMW, Acura will only compete in the IMSA WeatherTech series for the foreseeable future, although the car is eligible to compete in the Hypercar class of the World Endurance Championship. That means he can race at Le Mans. Cadillac will run one car in the WEC next year, while Porsche will have two, although it is unclear whether those manufacturers will bring additional cars to Le Mans. Acura, which is largely a North American brand, would require approval from Honda in Japan to run Le Mans, although that possibility is apparently on the table before 2024.

As with all LMDh cars, Acura will pair its combustion engine with a hybrid energy recovery system developed by Bosch, Williams Advanced Engineering and XTrac. The LMDh class will be bolstered with cars from Lamborghini and Alpine in 2024, although the French brand is unlikely to race in the US 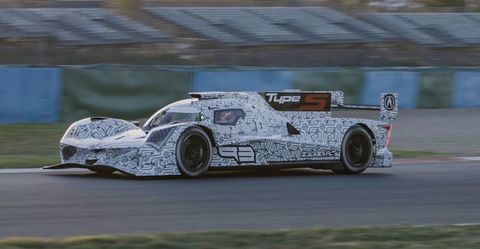 Acura, Cadillac and Porsche all have LMDh cars on the track now, and the BMW M Hybrid V8 will begin testing in a few weeks. The IMSA GTP class will debut on next year’s Rolex 24 at Daytona, with many more testing underway. Given Acura’s strong form in DPi now, expectations are very high for the ARX-06.