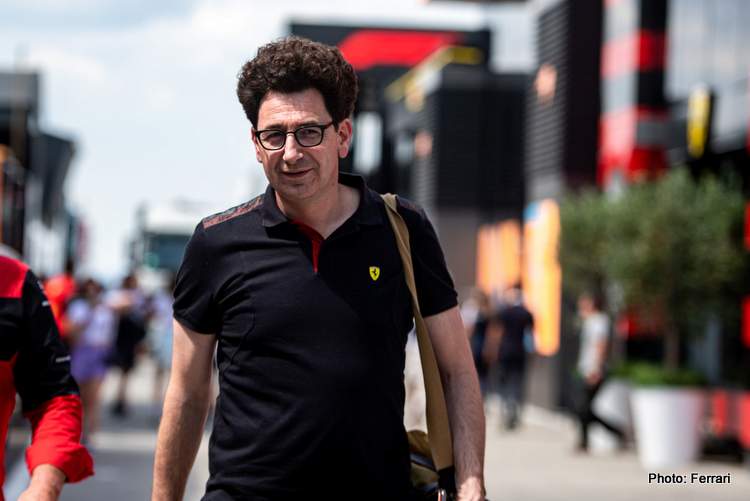 Binotto was defiant after the race when he was faced with questions about Ferrari’s strategy, an area where the team was embarrassingly bad.

He went instead to the team’s F1-75, fast all season but so much around the Hungaroring according to the Swiss-born Italian.

Ferrari responded to Red Bull’s undercut attempt mid-race and put Charles Leclerc on hard tires after a shorter-than-expected stint in the Mediums, a decision that left the Monegask baffled.

Asked about the use of the Hards, Binotto said: “I think the main reason, before we opted for the hard tyre, I think it’s important to say that we believe the car didn’t work as expected and that we It didn’t have the speed we hoped for looking back on Friday and the pace we had in the race conditions on Friday.

“So today was definitely different conditions, a lot cooler. But overall the speed wasn’t big enough today, and whatever tires we used, I don’t think we were as good as we wanted and not as good as we were.

“Certainly worse with the hard ones,” he said of the F1-75 pace. “So when we mounted the hard, our simulation was that it could have been a few tough laps from the warm up, it would have been slower to the medium for 10-11 laps, and then it would have come back and be faster than the end of the stint, and it was a 30-lap stint.

“We mounted the hard tires at the time, because with a stint of 30 laps we tried to protect the position on Max,” Binotto reasoned. “It certainly would have taken too long for the softs. Our pick and analysis, yes, it would have been difficult at the beginning of the stint, but it would have come back towards the end.”

The Ferrari team boss again blamed the car, saying: “Overall, the car was … I know we didn’t work so well on other cars, but still the analysis we did and I think, like me said before, the main reason is not to look at the strategy, but why the car was not as good as we had hoped today.”

Binotto claimed Carlos Sainz’s race was proof that the quarterbacks did a good job, saying: “The car, for the first time this season, was not as competitive as we were normally looking for.

“It’s also the case with Carlos, Carlos followed exactly the same strategy as Lewis, he started in front but finished behind, and Lewis finished 10 seconds.

“So the car didn’t perform well today, and if the car doesn’t perform then the tires aren’t performing as they should, and certainly not the hard tires,” the 52-year-old insisted.

Let’s give Binotto the benefit of the doubt that Sainz’s strategy was in order and that it was the Spaniard who struggled with his car, but could that also apply to Leclerc?

He led the race in the pits, and as he said afterwards he was happy with his pace, until of course he was put on the dreaded Hard tires that were causing problems for other teams that used them before, namely Alpine.

Be that as it may, Binotto’s explanation is not good enough, especially in this one formula 1 season for the first time in years, Ferrari has a good chance of fighting for the title. (Additional reporting by Agnes Carlier)

Not the Sunday you deserved #Tifosi.

Thank you for your support through thick and thin#essereFerrari #Hungarian GP pic.twitter.com/BRzsX9K8tF