Buick has climbed to the top.

The annual owner survey tracks the number of issues reported in the first 90 days of ownership. Issues can range from major component failures to user dissatisfaction with the design and functionality of features such as infotainment systems, which accounted for the majority of complaints at 25%.

Dodge, Chevrolet, Genesis and Kia rounded out the top five in a year in a poor year for the industry as a whole, averaging 162 to 180, a new record JD Power attributes to the problems posed by the coronavirus pandemic. .

The Buick Enclave is the top model in Buick’s all-SUV lineup.
(Buick)

“Given the many challenges that automakers and their dealers have faced over the past year, it’s somewhat surprising that initial quality hasn’t dropped more dramatically,” said David Amodeo, director of global auto industry at JD Power.

“Overall, the initial quality has steadily improved throughout the period history of this study, so the drop this year is disappointing – yet understandable. Automakers continue to launch vehicles that are increasingly technologically complex in an era when there are many shortages of essential components to support them.”

General Motors, which also ranked GMC and Cadillac in the top 10 brands, led all automakers with nine segment awards, including the Chevrolet Silverado which topped both the light and heavy truck categories and the Chevrolet Corvette which was named the best premium sports car.

Tesla was officially listed for the first time this year and improved for the third year in a row, having been provisionally listed for the past two years for refusing to allow JD Power to investigate its owners in 15 states where consent is required. As such, it is not eligible to win any prizes. 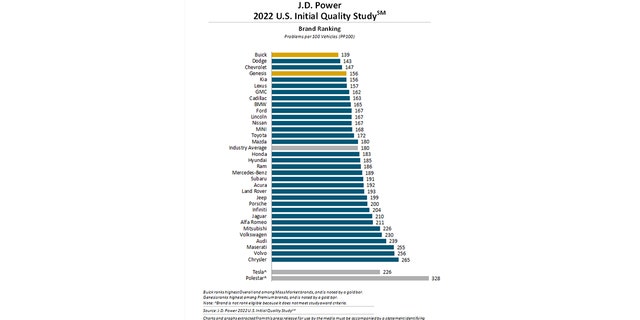 The all-electric Polestar brand, owned by Volvo, was at the bottom of the list with a score of 328, followed by Chrysler with 265 and Volvo with 256.