I’ve made it a point to attend Monterey Car Week for years and was disappointed that the past few years have been devastated by Covid-19. I am a collector and enthusiast of air-cooled Porsche 911s and my core business and passion are trade in vintage watches, which are always in abundance during Car Week, so I was excited to see rare rides and watches again after time away. There is something to be said for experiencing these things on a large scale – an experience many of us have been deprived of during the pandemic. 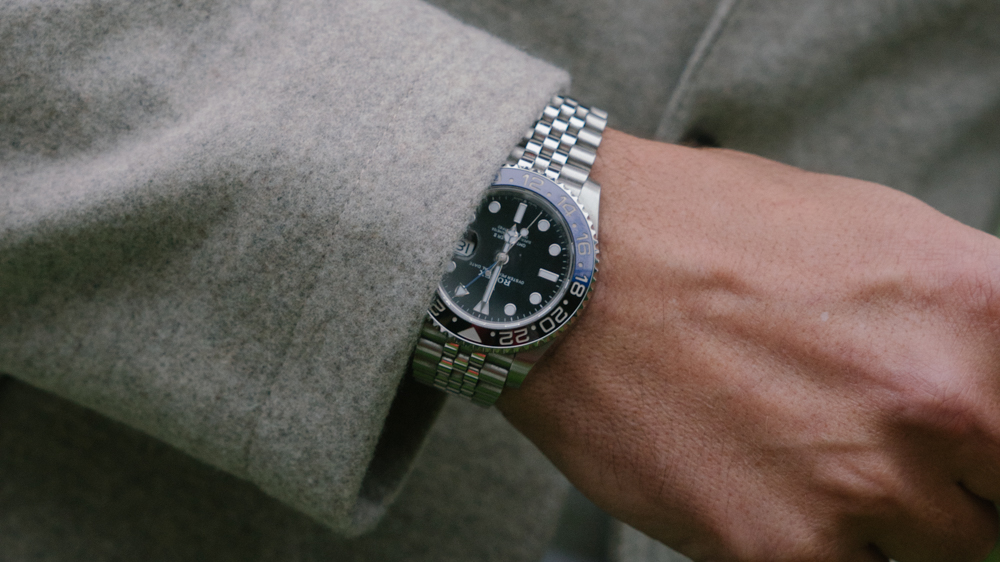 The wrists on stage carried no small sum of special pieces. But this past week proved to me once again that it’s not about the rarity of the item or its value, but also about sharing passions at every level with like-minded people. Whether it was the guy in front of me at the coffee shop wearing a vintage Seiko diver or the guy with a TAG Heuer he bought because it reminded him of the one Aryton Senna wore or the guy with a modern engineering marvel made by Richard Mille, everyone was there for the same thing. That’s what the real watch collector community and the real car enthusiast community share: celebrating and protecting these things and connecting with people who are just as passionate about them as you are. 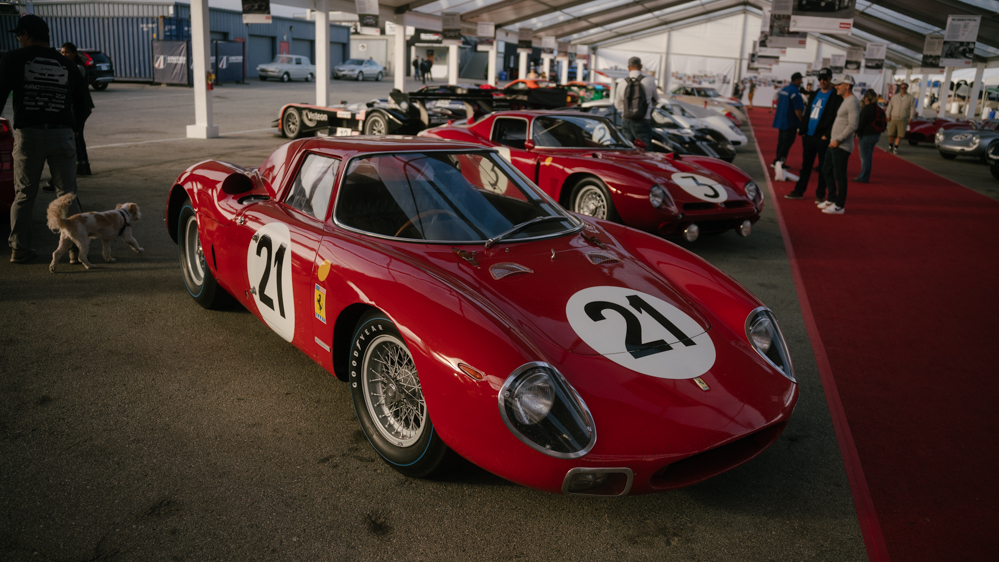 Watchmaking and automotive business have always had a special relationship, and whether you approach the two from a love of pure design, an interest in the technological advancements and precision that both industries foster, the tactile delights they both offer, or the tactile Sharing history of these two worlds through motorsport timing, watches and cars have always made perfect sense as bedfellows. From the iconic Heuer shield logo on the bodies of sleek Porsche Le Mans challengers and Ferrari Formula 1 cars of yore to heroic racers who became early Rolex ambassadors like Sir Jackie Stewart, these worlds have always been inseparable. And in my experience as both a vintage watch dealer and a hopelessly obsessed car man, the enthusiasts from these respective worlds are incredibly quick to become part of both world’s. I see it happening all the time with my friends and clients, and I’ve always said that anyone who can appreciate the things that make a vintage car so intoxicating will appreciate a vintage watch.

While I took part in the events, including an exciting track day at Laguna Seca sponsored by Hagerty and Radford Motors (founded by Formula 1 World Champion Jenson Button along with Ant Anstead and Roger Behle), the Porsche Club of America’s Werks Reunion (which was mainly interesting to me as I’m a daily driver of a 1975 911S hot-rod), and halo shows like the Quail and Pebble Beach Concours, I was constantly reminded of these connections. As I took in the incredible group of winning Le Mans cars assembled in the Laguna Seca paddock, I gazed at the Ferrari 250 LM that helped the legendary Jochen Rindt to victory in 1965. I was wearing a 1968 Heuer Autavia ref. 2446c Mk. 1 which was very similar to the ref. 2446c MK. 3 Autavia model preferred by Rindt throughout his career. Later I saw someone with a beautiful 1960s Universal Geneve Compax (ref. 885103/01) “Evil Nina”, which had the reversed dial of the watch Rindt’s wife Nina often saw wearing as she watched her husband’s laps in the period measured. 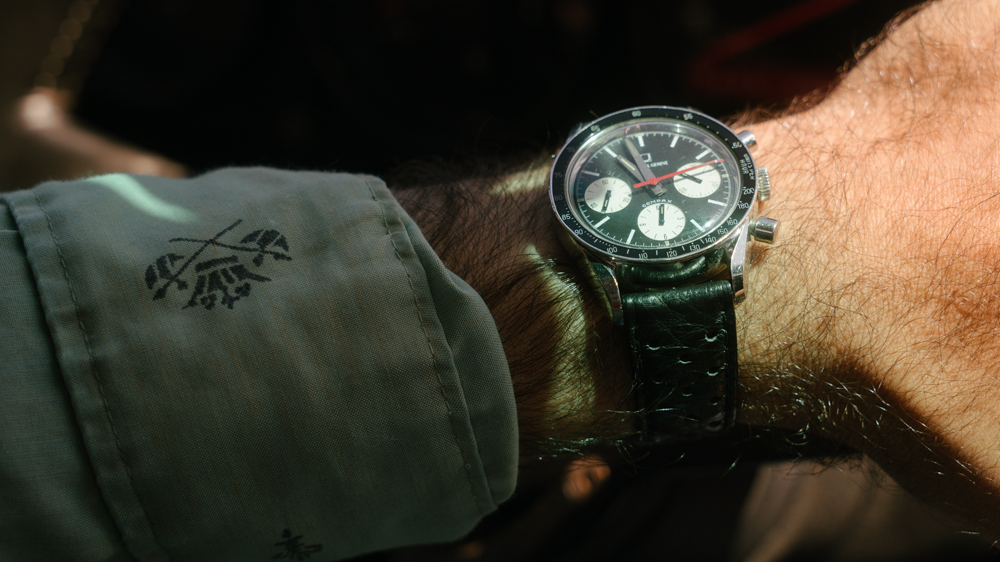 A few days later I had a similar moment of synchronicity. I found myself timing the laps of Paul Newman’s 1979 Le Mans-class winning Porsche 935 in the “Hawaiian Tropic” livery as it rages around Laguna Seca during a historic race with my personal Rolex ref from early 1971 6262 “Paul Newman.” In these situations, you quickly understand the direct connection these objects have with the past and with its heroes, and although we talk about these connections constantly in watch circles, we rarely experience them firsthand. 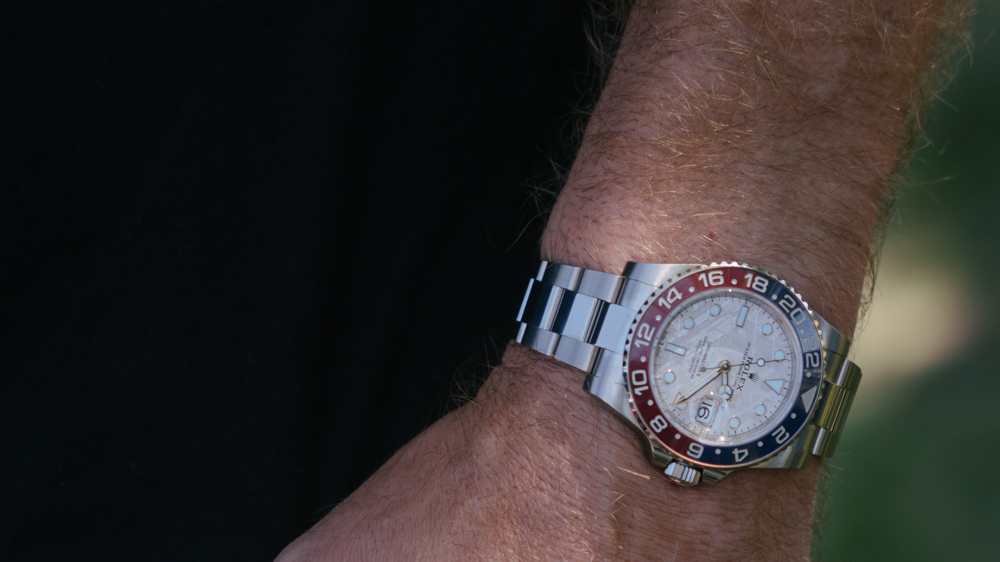 Although my own interests and passions are mainly centered around the world of vintage watches, the best of the contemporary side of watchmaking was also well represented. Brand ambassadors such as Button, who presented a white gold Rolex GMT-Master II ref. 126719BLRO with a beautiful meteorite dial as he treats fans to hot laps around Laguna Seca in the brutally fast Radford Type 62/2. 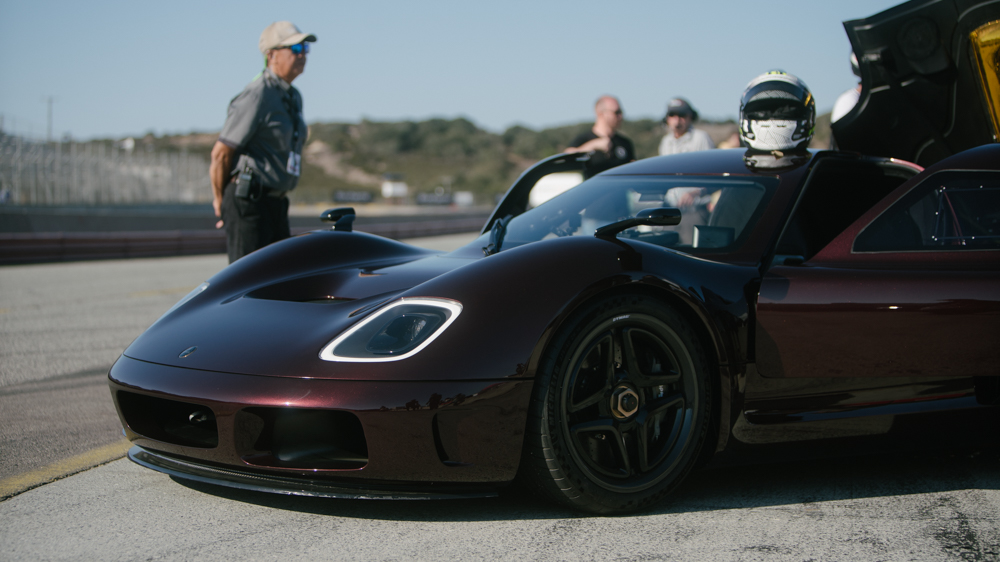 Four-time IndyCar champion and three-time Indy 500 winner, Dario Franchitti, also wore a contemporary Rolex GMT-Master II – a ‘Batgirl’ ref all weekend. 126710BLNR configuration on a Jubilee bracelet. He wore it on his right wrist due to an old racing injury that prevented him from wearing it on the left. 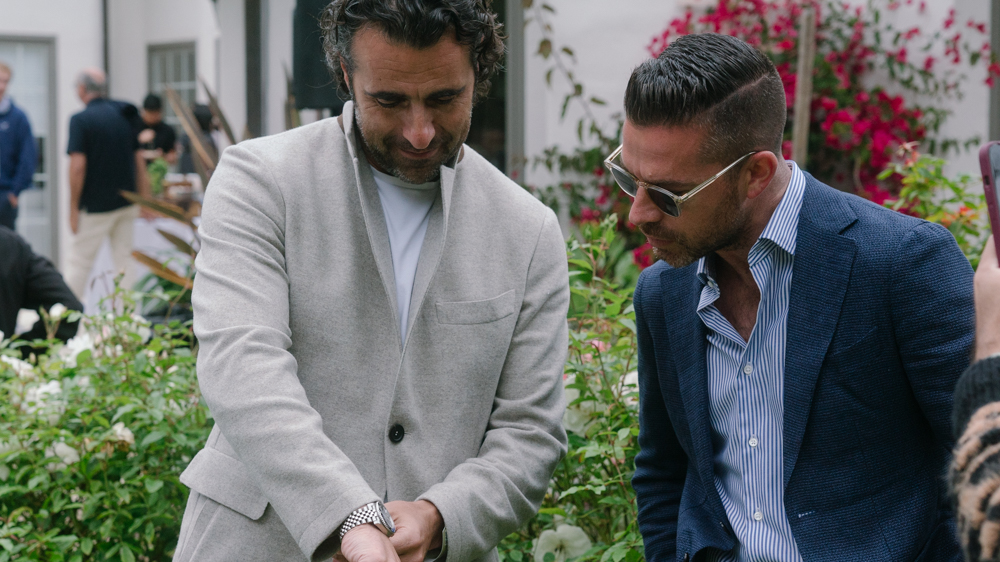 I was struck by the thought that while these new Rolexes worn by these racing legends were fresh and showed little sign of use, we were witnessing their stories being written in the moment. Did the elegant white gold case of Button’s recently acquired GMT take a dent or scratch during those hot laps? Would that watch ever be remembered as the trusty timepiece a legendary racer wore as he shook off a future classic supercar? Absolute. Every watch and every car’s story has to start somewhere, and while Car Week is so much about the past, it also showed that watch collecting does indeed have a rich future ahead of it. 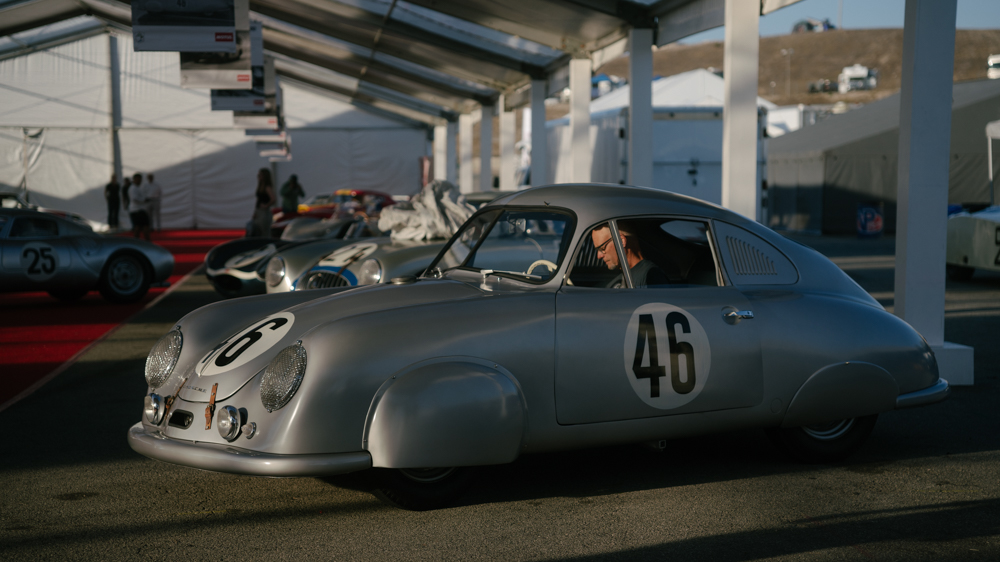