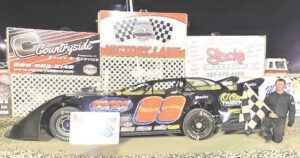 OWENDALE – When people say that a certain skill is in someone’s blood, it is not always the truth.

But in the case of the Murawski family, it certainly carries some weight.

Perhaps the most successful of them, though — at least at the youngest age — would be Matt, currently a sophomore at Elkton-Pigeon-Bay Port High School.

For his father Billy – a 24-year veteran of stock car racing – the performance brought back emotions matched only by his own days on the track.

“Indescribable,” Billy said of his son’s title. “A bit like winning the biggest race you could ever win. Just crazy.”

To understand Matt’s impressive feat, you should know more about his father. Billy was a three-time pro stock car champion on the speedway.

“My dad raced and I’m just getting started,” Matt said. “My dad raced for 24 years and I was just always there, so I got in.”

Matt started racing at the age of 4, competed in motocross for five years at MPX in Sebewaing and won four championships during that time. His father also raced on the circuit in Owendale at the time.

They eventually sold the four-wheelers Matt had raced and bought him a road car to race at Silver Bullet.

“When kids are around racing — a family-oriented racing family — they’re kind of used to seeing things,” Billy said. “We put our kids on the four-wheelers or dirt bikes — you could just tell they had some sort of talent to do it.”

Matt added: “He actually wanted to be ready and I was there and thought I was ready to race a car so we got rid of the four wheelers. It’s a very different ball game than racing motocross – you don’t have jumps or anything something like that. Once you’re in a car, you start going round and round.”

And despite what some consider a rapid rise to success, that wasn’t exactly the case for Matt. He started racing at Silver Bullet at the age of 10, in the street stock class.

“It took a lot of time. It’s not something you just get in and do,” he said.

“I thought it would be easy, but it’s not easy, that’s for sure,” he said of the experience. “You’re on dirt and it’s slippery and you have to figure out how to drive around the track.”

His freshman year, in his first race, Matt said he started in the back and finished in the back. But he succeeded quite quickly.

That year he finished sixth overall in the street stock class. When the opportunity arose to buy a professional model car a few years later, his father seized it.

“I knew he was a pretty good driver,” Billy said of making the jump to the top class. “He listens well and I told him everything he needed to know.”

Billy added: “He turned out to be a very good, mature driver.”

When the 2022 season started, Billy said he asked his son what his goals were for the upcoming season. His son’s answer: “Dad, I want to win the championship before I get my driver’s license.”

So with that goal in mind, Matt set out to achieve it.

Over the course of the season, he racked up one heat race win, three feature wins and 13 top-5 finishes – and on August 27, he reached his goal of becoming a professional model champion at age 15.

“That was my goal. It’s absolutely cool to win a championship,” he said.

Aside from all the hard work he and his family put into it, Matt said this wouldn’t have been possible without the generous help of his multiple sponsors.

Going forward, Matt said he wants to win additional championships at Silver Bullet and eventually race at other tracks to further test his skills.