Frank Majors celebrated his 80th birthday last Friday. The party was at the workplace of his lifelong friend Charles Pitts, who has Pitts Auto Sales on West Main in Atlanta.

Pitts Auto Sales is a meeting place for many people, some on foot, some on wheels.

Charles himself has been here for 26 years. Before that, he was a longtime manager of a gas station for the adjacent Jewell Mason Service Station. Charles married Shirley Mason, the boss’s daughter, don’t you see, and his car sales building is a gathering place for people who like to talk.

Joking is more what they do. On any day of the week, Charles, his employee Wayne Mathews and friends Majors, Danny Simmons, Mike McCasland, Norman Green, Jimmy Clark and Frank’s son Terry with granddaughter Boston, can be around any day of the week.

At least that’s the ones who showed up for Frank’s birthday party with pizza and cookies that Charles offered.

Pitts Auto Sale is just one block from downtown Atlanta, the meeting point of the city’s north, south, east, and west streets. Here, the intersection of North and South Louise and East and West Main is without a doubt Atlanta’s busiest intersection.

Neighborhood wise, Pitts Auto Sales could be considered ground zero. Even as the birthday party came to an end, an uninvited guest showed up at Charles’ door. The customer drove one of Charles’ note cars and asked if he could have an air conditioning hose fitted. It was hot. But the driver had no money.

Charles had to check that his customer was aware of his payments. He wasn’t. But Charles got out anyway and somehow got the friendly chap on his way.

Then Charles told a similar story about two passing strangers who gave him the chance to befriend someone.

“One was a young man who came by every morning,” Charles begins. “One day I went out and asked why. He said he was going to work at Wal-Mart. I told him not to walk, so I took him and gave him a car to write down. He paid for it in the end.”

The other was a woman who appeared to be a capable person, but walked.

“One day she looked a little tired, so I asked her, and she said she walked to work regularly. I suggested a car. ‘No money,’ she said. I took a chance and showed her a “Get a car. She paid regularly until I left. I thought okay, I’ll never see that car again. You can’t go after them if they’re far away.”

But after a month or so, the lady sent some money, until finally, even after moving to another state, she paid everything.

“I actually felt better about myself,” Charles said.

Back at the birthday party Friday, Charles and Frank warmed up the conversation. Charles has one vivid memory, which is why the two are more than lifelong friends.

“Frank is one of the reasons I’ve been married for over 60 years. He introduced me to my wife Shirley.’

It seems that in their sophomore year in Atlanta High School, they both saw freshman Shirley Mason at the same time.

“I looked back and told Frank I was going to marry that girl. I went to another table probably trying to figure out a way to get in trouble, and the next moment I knew Frank was there with her the talking.

“I know it’s hard to believe now, but I used to be a little shy,” Charles pauses to explain.

And so the two competed for Shirley and Charles won. Recently, Charles and Shirley celebrated a more than 60th wedding anniversary. And so Charles thanks Frank every now and then, especially at birthday parties with other people in the area, for introducing Shirley.

Needless to say, this memory goes unnoticed. Frank, a former welder, oil slick guy, veteran and thoughtful person, gives the best he can.

But if anyone were to stay for a while, it’s Charles who has the best stories to tell. He begins by saying that he was born in Possum Flat, Texas. That’s next to his second home, Blossom, Texas, where he grew up for the next nine years.

From there he came with his father AE Pitts and mother Molie Cowser Pitts to Smyrna, where he spent the rest of his childhood working. Work is what he did. No school, no paid job, but work … family work.

“We had so much and so little,” Charles, one of the eleven children, likes to say.

Here’s a part of his story.

It seems the family at Blossom may not have had indoor plumbing, but they had a pool to swim in, a bath to bathe in (once a week) and a large yard and lots of animals.

“We had a big building to hang so many pigs in and two chickens every Sunday for dinner. We had so many to feed.

“But I remember my mother, who was the smartest woman I ever knew, even with only a fifth grade education, and there would be bags of food in the smokehouse with the names of neighbors in need or poor people on them. We would give that food for them.”

Charles’ parents were Irish and his hard-working father couldn’t read, but he remembers his mother teaching his father to read Zane Gray’s western novels line by line in bed.

One of his favorite stories is that when he was ready to be a freshman at Atlanta High School, the coaches said he would come out to play football.

“I didn’t know anything. I didn’t play. I worked. But I was told to come and train. This was on a Monday and Friday we had a game.

“I had to block. One time, when I ran to the pitch, my friend David Sims caught a pass next to me, and I, a guard, was not allowed to be there. I got a penalty and everyone got mad at me.

“When I got home, Dad, who didn’t like football, told me I still had my chores to do. I knew what they were, so get to work, he said.”

Today, at Pitts Auto Sales, Charles has plenty of time to remember and plenty of friends to tell stories with. He may not know it, but his business is close to the heart of Atlanta and other small towns. Charles is there, always working. And if he sees you walking by, he may offer to sell you a car.


Owner Charles Pitts, left, likes to say he’s been in this place for over 20 years, but he couldn’t get along without employee Wayne Matthews, anyway. “And I’m not kidding,” Pitts says. (photo by Neil Abeles) 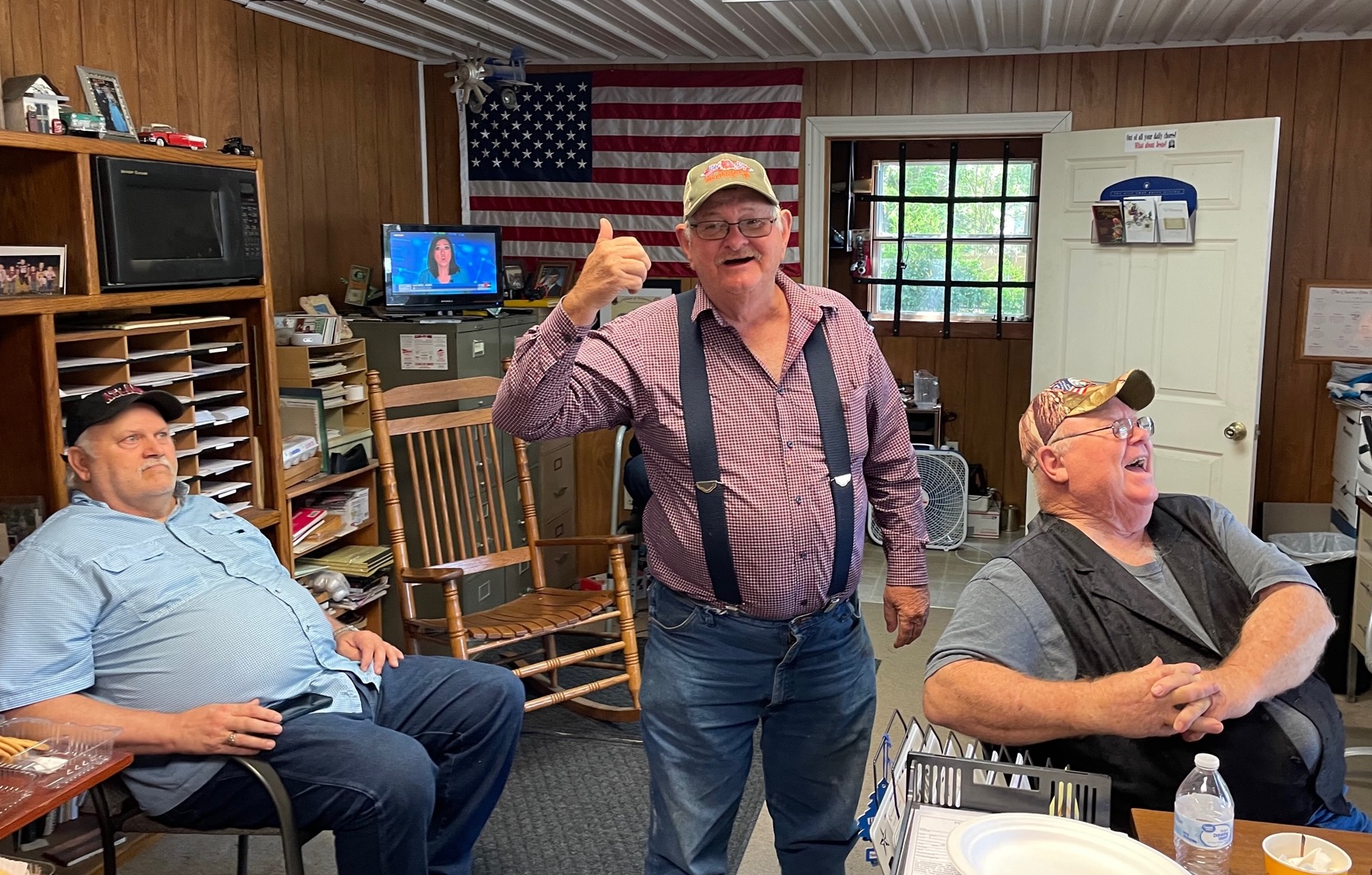 If it seems like not everyone believes Mike McCasland (thumbs up), it might be true. Norman Green, left, and birthday boy Frank Majors seem a little suspicious. (photo by Neil Abeles)