Harley fans are pretty diehard motorcycle enthusiasts. They love the motorcycle lifestyle as much as the motorcycle: the culture, vests, chaps and traffic rules that have come with every Harley-Davidson since the company was founded in 1903. Indian was founded in 1901, but since then had a few “interruptions” in production. There may have even been some bankruptcies. Hey, nobody’s perfect.

But since the purchase of Indian by Polaris and the new management of Harley, both companies seem strong and ready for the future. And both are American motorcycle icons, their rivalry being just as much a part of the fabric of the country as Ford vs. Chevy, Yankees vs. Mets, Coke vs. Pepsi, deep dish square vs. thin crust round. We will never agree.

But we can all go to our local Indian or Harley dealers and test drive and decide for ourselves. I did. I actually borrowed a couple of big bikes, one of each brand. The largest, most comfortable of each. And I drove.

From Harley, I chose the Road Glide Limited, the bike you’d want if you were planning a cross-country road stamp with your significant other on the back. Launched in 2019, the Road Glide Limited replaced the Road Glide Ultra, which was itself new in 2011. The new motorcycle’s mighty Milwaukee-Eight 114 air-cooled V-Twin delivers muscular torque of 122 lb-ft and 93 horsepower over a wide, very usable, very nice tire. It has to, because the big brute weighs 932 pounds wet — about double what your favorite sports bike weighs. If you want more power, Harley’s Screaming Eagle catalog is packed with power upgrades for your bike. The Road Glide Limited starts at $28,729.

From India, I chose the Pursuit Dark Horse, a close competitor to the Harley Road Glide Limited. It starts at a whopping $30,999. The Indian’s PowerPlus liquid-cooled 108 cubic-inch V-Twin makes 122 horsepower and 128 lb-ft, which is 29 horsepower more than the Harley. But there are numerous configurations of both models, ranging from the mid-20s to mid-30s depending on how you load them.

Both test bikes came with impressive audio systems, with tunes coming from the front and rear speakers. Both also have plenty of lockable storage space. The Indian lists 5.6 cubic feet of remote lockout while the Harley has 4.7 cubic feet. Both have a top case that fits two full-face helmets. Both have six-gallon gas tanks. Harley lists 43 mpg for the Road Glide, but Indian doesn’t list mileage – published figures range from 34 mpg to 37. So the Harley has a range of 258 miles and the Indian maybe less, maybe 204 to 222 miles. 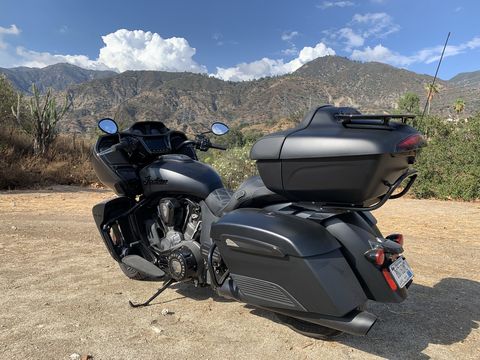 The Indian Pursuit went after it.

For a week I rode them both back to back. Let me tell you how that went.

Both bikes are big and, like I said, heavy. The Indian is 912 pounds full of fuel for the Harley’s 932. These are not good bikes for beginners. They’re both firmly in the big American V-Twin cruiser category, where curb weight is more like kinetic energy waiting to be directed somewhere. Point them at the road and, like all moving objects, they will tend to stay in motion until action is taken by a great force of nature. Or their brakes. Both bikes have good brakes, dual discs at the front and a single disc at the rear – the 300mm front/rear Harley and the Indian 320s front and 298 rear. Both have ABS as standard. I took up both Angeles Crest Highway and went into the corners with gusto never wanting more braking power, nor did I feel a fade on either bike. Granted, neither ever felt like a sports tourer on ACH (although the BMW K1600 GT did), but buyers don’t expect that from these two cross-country cruisers. 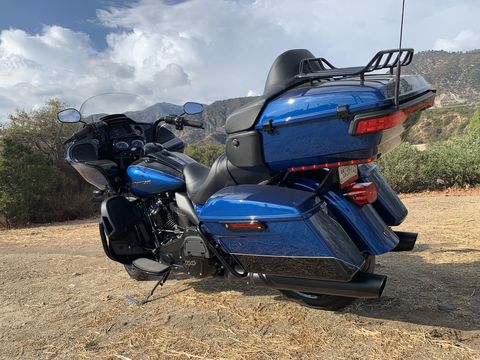 Harley Road Glide Limited has plenty of luggage space for a cross-country adventure on two wheels.

To stay upright during normal riding, especially in slow motion parking maneuvers where everyone is watching, these big, heavy bikes are most easily controlled by their torque. Spin the accelerator and you’ll instantly get a blob of it. You have to trust the couple, Luke. Master its subtle application and you will master these beasts, both. The same goes for winding mountain roads. Cornering is best done with only a minimal amount of throttle at low engine speeds. The couple is there, waiting for you like a trusted friend, ready to pick you up and send you on your way.

Let’s take a look at the Harley. Right out of the parking lot, that mountain of torque announced itself, all 122 lb-ft. It made maneuvering easy, as long as you could trust it. Don’t rely on it anymore, put your foot on the ground and you might be in trouble. The riding position is comfortable with a big butt. Likewise, the handlebars are raised a bit and pulled back where you can easily reach them. You will feel more comfortable in this riding position than on almost any other bike. 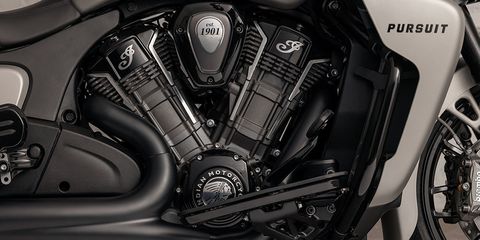 Get on the freeway and the Road Glide feels remarkably happy as it speeds along at 90 mph. You may not even notice – you may be wondering why all the other cars around you go so slowly. Surprisingly, the vibration you might have feared from a whap-whap-whappping potato-potato-potato V-Twin is barely noticeable at speed. Power delivery is smooth over the rev counter. Torque in the mid-range is also plentiful. There is almost never a need for revs over 3000 rpm in normal driving, although they are there too, waiting to help. Cruising at 4000 rpm and 90 mph was about as smooth as anything on two wheels.

Harley seems proud of its aerodynamic airflow around the large fairing. The windshield should reduce shocks. And at first I was very impressed with the lack of it, especially when compared to something like the BMW R18 Transcontinental, another competitor. But with my bizarrely long torso I would like the windshield a little higher. It’s like Lamborghinis, made for shorter, more rambunctious pilots.

However, I was very surprised by the amount of heat that poured out of the exhaust on the right side of the Harley. I actually checked several times to see if my pants were on fire (they weren’t). I checked the vent valve in the front fairing to make sure it was open. I checked if the EITMS was enabled – it was. (In 2007, Harley added a feature called Engine Idle Temperature Management System to address heat issues on its bikes. EITMS disables the rear cylinder in certain circumstances. The Indian has a similar setup.)

While the Indian is liquid-cooled, the cylinders of the massive Harley V-Twin are still air-cooled, a great legacy in this day and age, but a feature beloved by Harley traditionalists. The sheer amounts of heat can be welcome on long winter rides, but on the 100-degree days I had the bike, it was almost unbearable (pre-written web commentary: “Stop your gullywumpin’ college boy! Suck it up and take the pain like a man!”).

To check the heat, I went to the same place where NASA got all its scientific instruments (Harbor Freight Tools), bought a pyrometer and took some measurements. 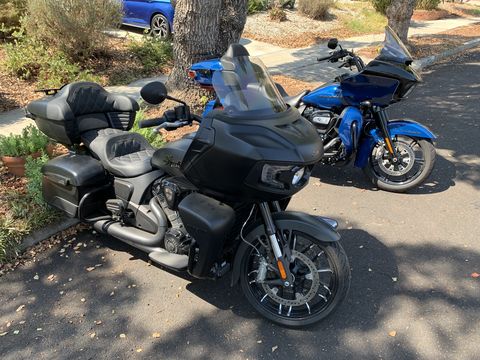 After riding both bikes on the same long uphill miles in the same ambient temperatures, I aimed the pyrometer gun at different parts of the engine and exhaust. I found that the Indian is indeed cooler, almost 200 degrees cooler, depending on where you point the gun. For example, the center of the Harley’s exhaust pipe was 380 degrees after the ride, while the same spot on the Indian was 188. The Harley was like a rolling hibachi. At first I tried to block out the heat with my gloved hand, but ended up riding my right boot on the fairing itself. This seemed doable and gave me a perky demeanor to anyone who happened to see me driving by. Maybe this isn’t a problem for you tough riders with leather skin.

In addition to not frying my own personal El Pollo Flaco leg meat, the Indian felt it had more power and better handling. You notice the power directly from the stand. The Indian felt tighter, as if he had higher torsional stiffness all over. Neither manufacturer has released torsional stiffness figures, so I judged on the bottom of my (hot) pants.

If I had to sum up the differences, both bikes would be comfortable enough in riding and riding position to cruise the country in fine style, but the heat from the Harley was a deal breaker for me. In addition, the sportier feel and response of the Indian Pursuit Limited compared to the slightly softer overall feel of the Road Glide made the choice easier. Winner: Indian, in my opinion.

This is a big, big class, with submissions from manufacturers across the board and around the world. While Harley and Indian are the preferred bikes for riders driven by their pride in American products and the long tradition of both brands, the choices vary. Or go for the range.

If you’re planning to sort it all out and move across the country, you should also consider the following:

These are great times to be a motorcycle enthusiast, so pick the bike that’s right for you and get riding!

What is your favorite engine for long-haul cruises? Comment below.