Remarkably, Goodyear has not changed the NHRA Top Fuel and Funny Car tire compounds in eight years for the oversized rear slicks.

“We are not concerned about the current state of affairs,” said Bedont, Goodyear’s chief engineer for drag racing. “We have two race engineers who go to the track every day [race]. We haven’t seen anything so far that has red flags on our side. We’re tracking that week to week and we’re constantly talking to NHRA. We test several times every year, all year round.

“We also have a few variations of this tire on the shelf that we can comfortably roll out as needed,” he said. “But we are happy with what we have now. We have been using this tire since 2015.”

Robert Hight has come closest to the 340 km/h mark.

Rogers, sales account manager, reiterated that: “We’re really not worried about where we are now with the speeds. We are comfortable with what we see. At Sonoma, with Brittany [Force] went 337 a few runs her tires looked great and actually a couple of those tires ran this [past] weekend (at the Northwest Nationals, near Seattle).”

Through constant testing and fine-tuning of engineering, Goodyear really has an asset in store.

“We have done tests. We are always testing. Every season we try to come out with a different development of the tire, whether we change the sidewall construction for tread compound, try to stiffen the tire, make it more robust. We tested last January. So we have another tire on the shelf,” Bedont said. “But there is no reason to introduce it now. Teams have stocks of tires. There is no need to change anything now.”

Rogers said: “We have no plans to change it, but we always want to keep learning because everything is constantly changing. Whether it’s the clutch disc or whatever these crew chiefs are doing, they’re pretty smart guys.”

“We have the technology to stay ahead of where they are.”

The question is at what point Goodyear would start to worry.

“We’re not worried about it,” Bedont says. “We have the technology to stay ahead of where they are. And we work very closely with the teams. We monitor every tire that hits the track. We follow tracking numbers. We are monitoring the tire life so that if we have a problem we can go back to the teams and work with the teams or with NHRA and see if anyone else is doing something else.”

The drivers are certainly not worried. They always want faster and faster. As Bedont said, “They’re so hooked up.”

Ron Capps recorded the second fastest speed in drag racing history in 2019 in Reading, Pennsylvania, at 339.28 mph. And he said when the championship countdown kicks off there at Maple Grove Raceway in September, it’s possible someone in the nitro rank will break the 340-mph barrier.

“Maybe this year you’ll see 340 when we get to Maple Grove (a facility known for mine shaft conditions) and the like. I have faith in Goodyear. I see no problem there. We can’t go much faster,” Capps said. “They’ll do something to keep it down, I’m sure. I have no problem worrying about the band.” 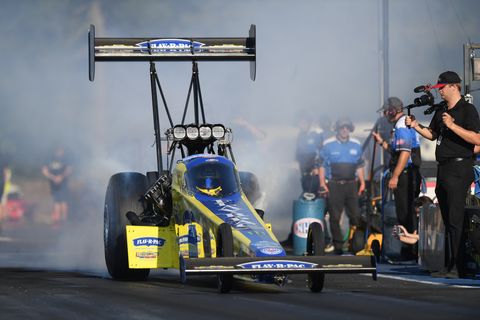 Brittany Force was fastest on the Top Fuel side in 2023 with five No. 1 qualifying efforts.

The owner of the Funny Car team of the NAPA Toyota Supra said: “The cars are so much heavier. I think the rev limiter kept them fairly at bay.” However, he said, “I foresee them… [NHRA officials] do something about this if we throw those numbers away again. I bet they’ll do something when we see those numbers rise, but it’ll be small I’m guessing. I do not even know. I have not heard anything. But I can be sure that if someone drives 339 like us or 340, the NHRA might want to do something — just a little bit, I’d think.”

It was in 2017 – five years ago – that Robert Hight, driver of the Auto Club Chevy Camaro Funny Car at John Force Racing, clocked the fastest run in NHRA history at 339.87 mph, in Sonoma, California.

He said he noticed the “NHRA immediately changed the rules – made us rear our heads and give us another rev limiter. And we haven’t even come close to that since.”

In addition, Hight said: “And we have no tire problems. Goodyear gives us a great tire. We ride on tires now more than ever in the past – ever. As a driver I feel very, very confident and safe in one of these cars.”

“From what I’ve gathered, talking to crew chiefs, it’s not tires — it’s closure (space) to stop the cars,” he said. “It’s not just the short stops on some of these tracks. There is much more [factors] that’s on top of that, especially with the weight of the cars. It will be a few more years and the crew chiefs will find a way around it.”

Hight knows that too: “I recommend NHRA — and believe me, I want to go as fast and fast as possible. It’s what this sport is always about, being faster and faster, setting records. That’s the goal. That’s what you work for. ” On the other hand, he said: “They’ve also made it where it’s very, very close, good racing. It’s a lot of fun and the fans sitting in the stands are treated to some very close side-by-side races. I don’t break their rules at all.”

Winners on the drag strip are determined by elapsed time, or “ET,” rather than speed. But speed is still what drives the public crazy. Maybe it’s just the song that everyone can relate to more. As for Goodyear, drivers can come.