A number of popular companies, retailers and manufacturers announced top recalls this week for products that could potentially harm consumers.

At the top of last week’s list of top recalls was Ford, which issued a recall on July 8 for more than 100,000 U.S. hybrid vehicles on fire risks. In the event of an engine failure, a significant amount of engine oil and fuel vapor can be released which can accumulate near ignition sources and possibly cause a fire under the hood.

No injuries or accidents have been reported so far, but consumers are encouraged to take their vehicles to a dealer to have the engine screen and active grille shutter adjusted to address safety concerns.

Hyundai recalled more than 10,500 of its previously recalled 2017 and 2018 Hyundai Ioniq HEV and PHV vehicles after determining that they may not have received appropriate modifications to resolve issues with their powertrain systems.

The previous recall was related to an issue with the fit of an electrical pin on the main relay in the power relays. Continuing to work with an incorrect fit can lead to heat and the risk of the rear seat catching fire.

Hyundai will notify all owners of affected vehicles with instructions on how to take their vehicles to an authorized dealer for repair free of charge.

On July 14, the United States Consumer Product Safety Commission (CPSC) issued a: Recall for 12,655 Sakar Tony Hawk Silver Helmets that do not meet the requirements of the positional stability and retention system of the federal safety standard CPSC for bicycle helmets. The helmets cannot protect the head in the event of a crash, which poses a risk of injury.

The item number AGE2515STH-SIL helmets were sold in Walmart stores nationwide and online from March 2022 to June 2022. The recall follows another recent helmet recall from company. In March, Sakar International recalled 89,000 of its Dimensions Bluetooth speaker helmets in the United States and 272 in Canada due to a similar head injury risk; the silver Tony Hawk helmets were provided to consumers as replacements.

Consumers should immediately stop using the helmets and contact Sakar International for instructions on how to receive a refund in the form of a $40 Walmart gift card.

The product was instead “incorrectly packaged” with chocolate chip cookies. Because the packages are filled with the wrong cookies, the package does not mention the presence of soy and eggs, which can cause serious allergic reactions in the consumer.

Starbucks has its new Sandwich with chicken, maple butter and egg on June 21 and reportedly removed from menus just six days later.

Hundreds of customers took to social media to share their symptoms of diarrhea, vomiting and stomach pain after eating the sandwich. Starbucks has acknowledged that the sandwich “didn’t meet Starbucks quality standards,” and a separate spokesperson told the New York Post that the sandwich was not related to listeria or salmonella.

Have you recently purchased any of the products listed in our top recalls? Let us know in the comments! And be sure to check the best recalls from last week. 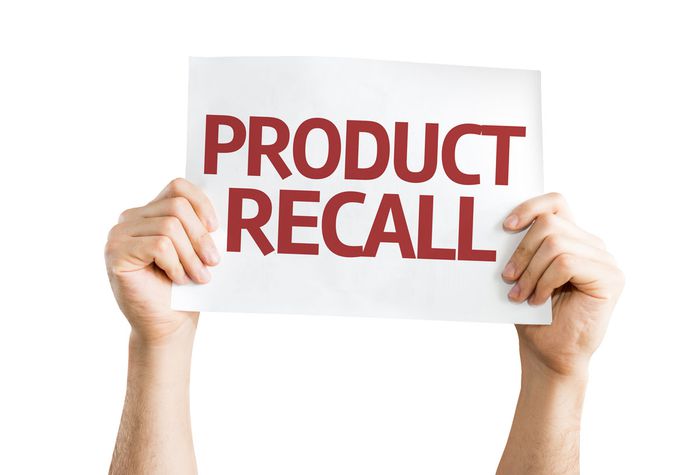 Major recalls for the week of 7/11 are Ford vehicles, Tony Hawk helmets

Top recalls for the week of 7/4 are Toyota Tundra, Scholastic books

Toyota recalls electric car because wheels could fall off