Toyota brought an all-new full-size tundra pickup to the U.S. roads for the 2022 model year, featuring a new chassis, new bodywork and a sleek new hybrid powertrain. We had a good time in the new tundra, driving it through urban and suburban environments and seeing how it fares on highways and side roads – but we hadn’t had time in Toyota’s ultimate off-road trim, the Tundra TRD Pro. The trim level is packed with special four-wheel drive technology and suspension bits, unique styling and all sorts of electronic aids meant to help the tundra roll over obstacles big and small with ease.

Recently, Toyota held an event to introduce the TRD Pro to the media at an off-road park just north of Detroit, where I got to put the big bad off-roader to the test and see what the automaker has improved on for its new monster truck. . 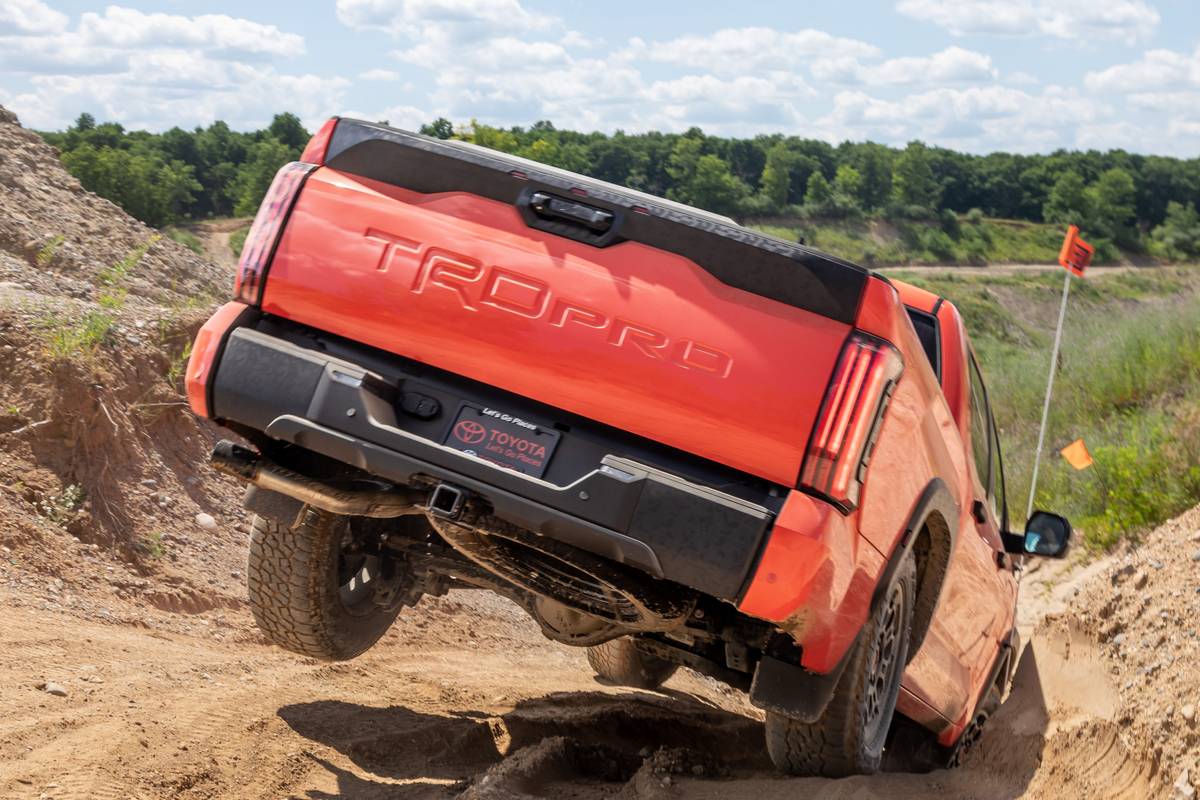 So what exactly does the TRD Pro trim bring to the tundra off-road feast? Well, it’s one of the Tundra’s seven trim levels, falling just below the top-end ultra-luxury Capstone. It only comes in one body shape: CrewMax (full four-door) with the shorter 5.5-foot bed and standard four-wheel drive. Only one powertrain is also available: the hybrid 3.5-liter twin-turbo i-Force Max V-6, which delivers 437 horsepower and 583 pound-feet of torque, paired with a 10-speed automatic transmission. It delivers power through a standard part-time 4WD system with an electronically controlled transfer case, an automatic differential lock and a low-range electronic box in the rear.

Unique to the TRD Pro, the suspension system features Fox 2.5-inch internal bypass shocks (with external reservoirs for the rear), a TRD front sway bar and a 1.1-inch front lift. This is an upgrade from the Bilstein off-road shock absorber setup you would get if you specified the TRD Off-Road option on lower tundras. The black 18-inch BBS wheels are shod with Falken Wildpeak all-terrain tires for a bit of visual flair. Out on the trails, the delicate parts underneath are protected by an aluminum front skid plate and special Xply Armor high-strength fibre-reinforced resin plates that protect the engine, fuel tank and transfer case. 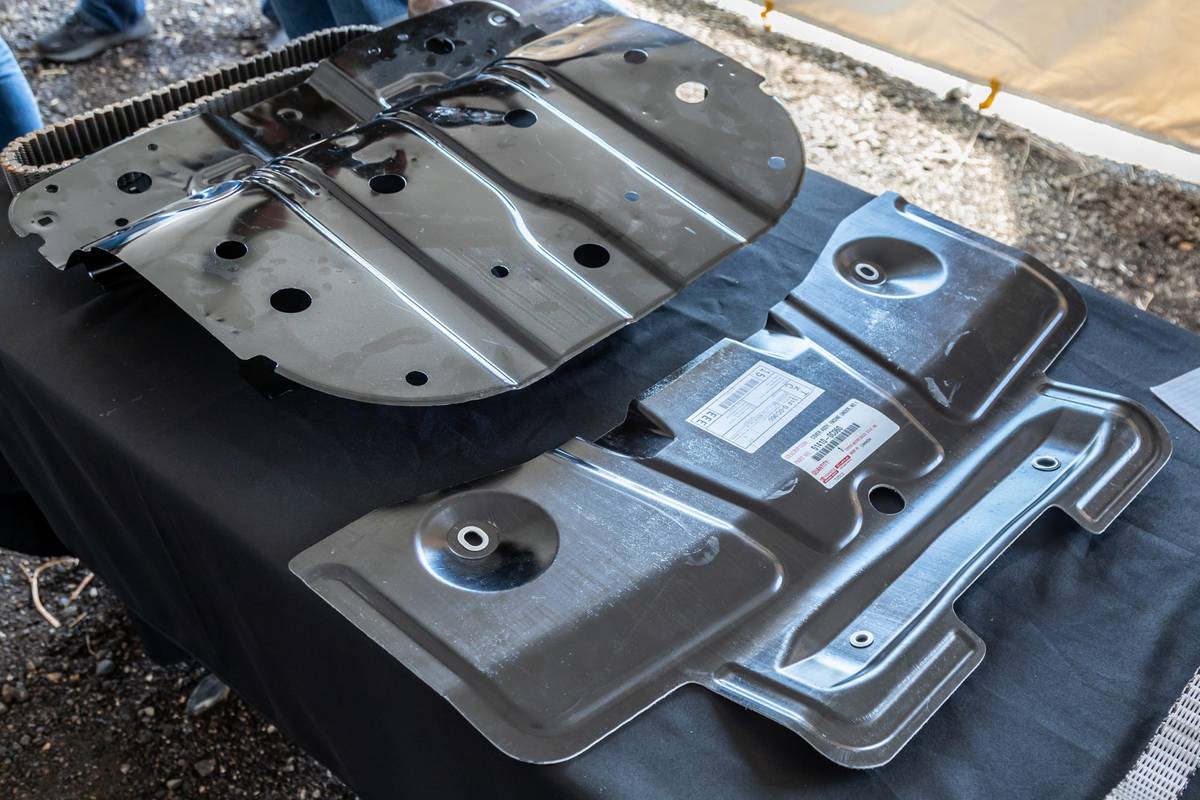 There are also some special electronic systems to run all these off-road goodies. It starts with the Multi-Terrain Select system that offers multiple settings for tuning off-road systems, traction control, throttle response, shift points and more. Downhill Assist Control is an electronic downhill function that causes the truck to automatically roll downhill at a set speed, and the Crawl Control function works like a low-speed off-road cruise control. In addition, the Multi-Terrain Monitor system connects a number of cameras placed around and under the truck to detect what kind of terrain you are rolling over and to help you see over blind hills as you climb, or from drop-offs. off. as you approach a cliff.

All of this equipment looks great on paper, but if it’s not easy to use and doesn’t do what it advertises, it’s really just dressing up gear for guys who want to control swanky brodozers. Fortunately, Toyota knows off-road vehicles and people are using them for what they’re intended to do, so rest assured, if it has TRD Pro on the side, it’ll be exceptional in the dirt. 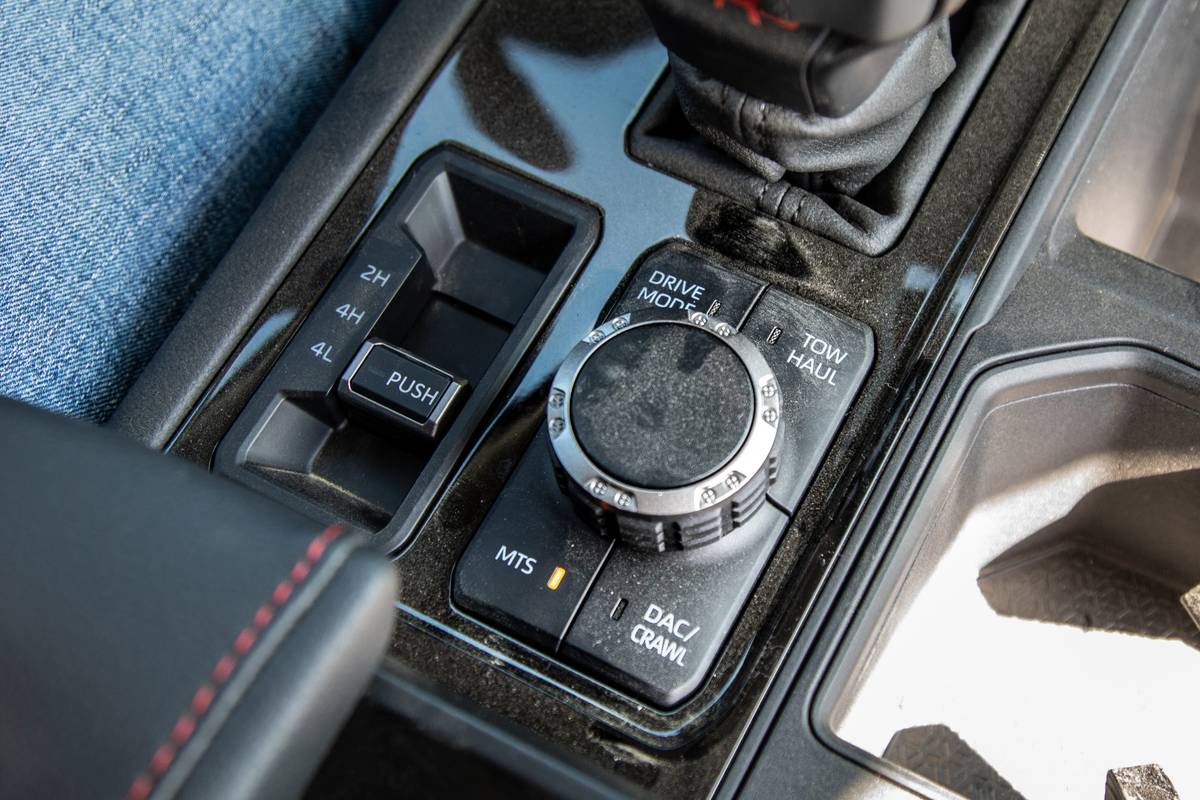 The weather was perfect at Holly Oaks Off-Road Vehicle Park, just north of Detroit, and a long line of 2022 Toyota Tundra TRD Pro trucks waited in the dusty parking lot to head out into the wilderness. My chosen steed was brilliant in bright Solar Octane orange, a color reminiscent of a hunter’s safety vest – I would feel completely comfortable taking one of these out into the deep woods as it feels like wearing this one truck from space. It’s practically anti-camouflage. Not a trace of Mossy Oak in sight.

Step into the driver’s seat and you’ll see the latest Tundra interior, a lot better than previous versions, with better materials, more logical layouts, larger buttons and a huge new touchscreen that displays Toyota’s latest and greatest efforts in a competitive multimedia system. The TRD Pro brings some more outlandish design choices, such as the large blocky “Toyota” lettering on the dashboard, some interesting patterns on the seats and upholstery, and the limited choices of interior colors. But it’s comfortable, spacious and, while not exactly easy to see thanks to the tundra’s unusually stocky windshield, an improvement over the old model. 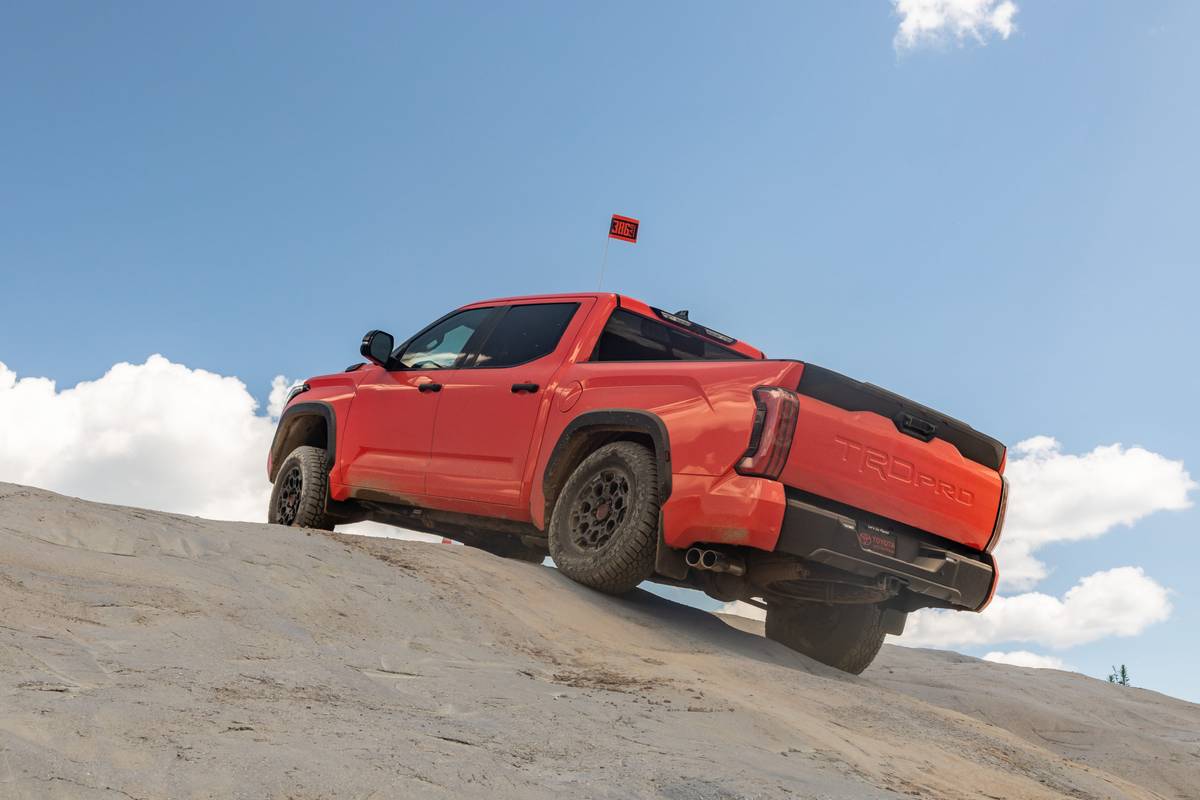 Going into the dirt shows what the TRD Pro was born for: romp in the rough. The varied terrain available to us showed that the combination of Wildpeak all-terrain tires and five-link coil-spring rear suspension provided a comfortable, well-cushioned ride over rough dirt terrain. This isn’t a competitor to the Ford F-150 Raptor or Ram 1500 TRX, though, as both off-road trucks are Baja-style racers meant for going fast over desert bushes. The TRD Pro is more like a Chevrolet Silverado 1500 ZR2 or Ford F-150 Tremor. The Tundra TRD Pro’s mission is more low-speed variability – it can handle rock crawling, cliff climbs or sand dunes with the same power, but it’s not meant for foot-to-the-floor cross-country blasts.

There is never a shortage of power or torque from the hybridized V-6 engine, although there is the unusual background music of what is unmistakably a V-8 engine from another vehicle (no more V-8 offered in the Tundra ). The smooth 10-speed automatic always seems to be in the right gear no matter the terrain, and the TRD Pro just cruises over the dirt or climbs steadily on slippery two-track with absolute ease. Tuning the Multi-Terrain Select system allows you to fine-tune the truck’s responses depending on the application, but even if you leave the truck in 4-High (there’s no full-time 4×4 four-wheel drive available in the TRD Pro) is more than enough to overcome most obstacles. Shift to 4-Low, though, and you gain access to the electronically locking rear differential, useful for loose grades where constant torque is more important than speed. 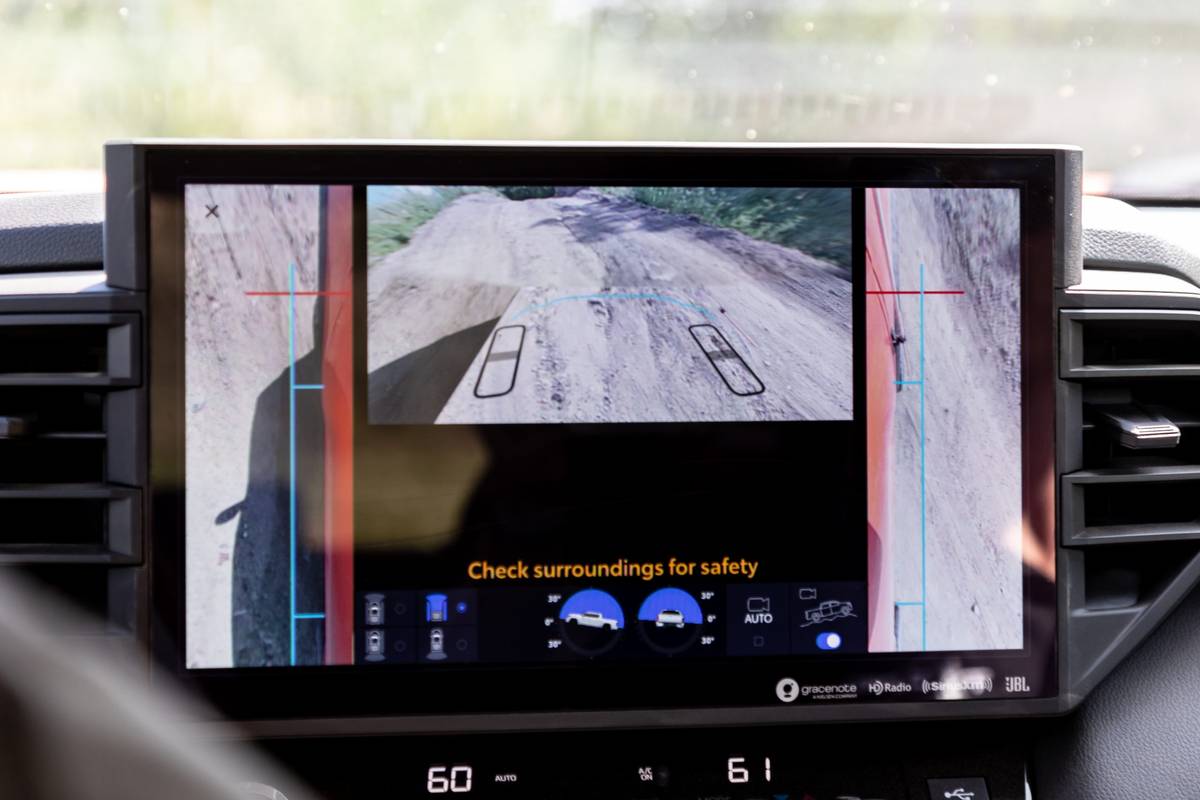 The low speed creep control is also available in the low range, but other than activating it briefly to see it work I can’t say I’m a big fan of an off-road cruise control – not this one or the one Ford is proud of . I’m having a hard time finding an application where this is a better idea than just driving the truck itself as applying the throttle is generally best applied directly, not automatically, when the terrain tends to change constantly. Not sure if I’ve found another situation where low speed off road cruise control is a real advantage, but it’s here if you want it as long as you’re already in the low range. 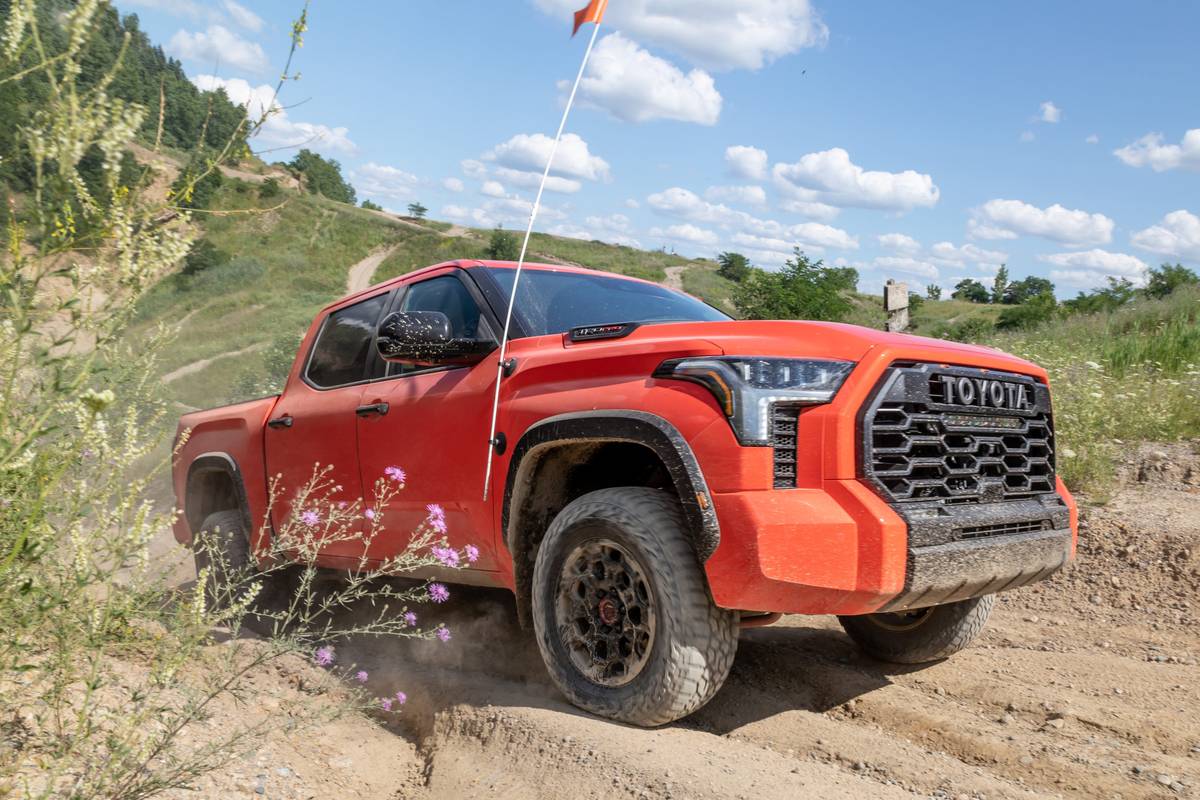 There are two aspects of the TRD Pro that I don’t understand. First, it beeped constantly at me off-road. You would think that parking and proximity sensors are deactivated if you put the truck in low range off-road mode, but no, they still scream and beep and carry on. Even pressing the mute button on the steering wheel will only temporarily silence them. You don’t get these kinds of problems in an off-road Ford, that’s for sure.

The other confusing aspect of the TRD Pro is the front design. The aluminum front skid plate is actually above and behind the front bumper, meaning any obstacle you come across that is likely to hit the plate will already hit that bumper and crack. And let’s hope you don’t get stuck on that obstacle, as there are no front recovery points (tow bars) on the TRD Pro either. If you find yourself in a tricky situation that’s too deep for you to get out of yourself, your only option is to try to recover the vehicle via the trailer hitch – a strange omission for a top-of-the-line off-road truck.

The 2022 Toyota Tundra TRD Pro is competitively priced against competitor’s off-road versions of pickups. There are almost no options for the TRD Pro trim, where you just specify the color and whether you want drag mirrors or not, and the price comes in at under $70,000 (destination included). In contrast, a Ford F-150 Tremor can be had for considerably less at around $56,000, but it doesn’t have much of the standard equipment that the TRD Pro has; check all the option boxes and you will match that $70,000 number. The Chevy Silverado 1500 ZR2 has a lot of the trick suspension goodies you find on a TRD Pro, but it also starts at the $70,000 level and goes up from there.

Toyota has defended the reputation of TRD Pro with this new model, expanding its capabilities with new electronic systems and also some tricks. But competitors in this category are formidable and it requires constant upgrades to keep up with the field.