When Autoweek interviewed Adrian Newey after his ride with the Aston Martin Valkyrie at the Goodwood Festival of Speed ​​last year, he promised it wouldn’t be his last car project. Now, just after this year’s Goodwood event, we have confirmation of what will be its next, with Red Bull confirming it will produce a Newey-designed hypercar that will be sold as the RB17.

The fact that the RB17 won’t really be street-legal suggests that Newey has at least one more design to follow. Although it can only be ridden on the track, the goal of the RB17 is clear: to go even faster than the track-only AMR Pro version of the Aston Martin Valkyrie.

While much of the work on the outgoing Aston Martin Valkyrie, which was originally the AM-RB 001, was done by Newey and the Red Bull Racing Formula 1 team, Aston’s official line is that the AMR Pro has been significantly reworked since the launch. two companies split after the British sports car maker bought its own F1 last year. The RB17 appears to be Newey’s response to this, and while only a single sketch has been released to coincide with the project’s official announcement, we do have some other details.

The RB17 will feature the “most advanced ground effect package available in a series production vehicle.”

The RB17 will use a carbon fiber structure and be powered by a twin-turbocharged V8 hybrid engine that will deliver a minimum of 1,100 horsepower. It will be a two-seater and only 50 will be produced, each with a pre-tax price tag of £5million – that’s $4.1million at current exchange rates. Anyone interested in getting their name is encouraged to contact [email protected]

The RB17 is produced by Red Bull Advanced Technology, a separate division of the Red Bull Formula 1 team, but based on the same 270-acre corporate campus in Milton Keynes, England. The new car will be designed and built at this location, with key components, including the gearbox kit, developed and built in-house. Buyers will be deeply involved in the development program and will experience the car through simulators and, once delivered, expert lessons on the track. 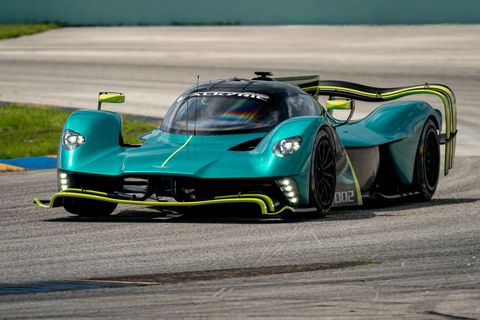 The Valkyrie AMR Pro, above, is “designed to deliver performance comparable to that of an LMP1 car, but the RB17 will be much closer to the level of a Formula 1 car.”

This will almost certainly be necessary given the performance aspirations of the RB17. Red Bull promises it will feature the “most advanced ground effect package available in a series production vehicle”, which is a bold claim when you consider that the rival T.50, designed by Gordon Murray, another famous one-time F1 designer, uses of fan-assisted active aerodynamics.

As someone familiar with the new project told Autoweek: “The Valkyrie AMR Pro is designed to deliver performance comparable to that of an LMP1 car, but the RB17 will be much closer to the level of a Formula 1 car. come.”

A promise that sounds both exciting and terrifying, especially after a recent passenger ride in the Valkyrie AMR Pro, I was convinced that few billionaires will have the talent or stamina to unlock its full feats. Will anyone outside of those with front-end Formula 1 experience be able to tackle something even faster?

We look forward to finding out when it arrives in 2025.

Do you think the RB17 can outdo the Valkyrie AMR Pro? Share your thoughts in the comments below.