Cars from the early age of the automobile have lost a bit of their luster in recent years. With usability moving higher and higher on the collector’s wish list, the early stars of the automotive world are falling out of favor. There’s no denying that newer classics offer more modern handling, but that doesn’t mean there’s nothing to like about those nearly centenarians. Take, for example, this 1929 Ruxton Model A Sedan, which has arguably the best factory livery in automotive history.

For those unfamiliar with early automobilia, the Ruxton Model A was built by New Era Motors between 1929 and 1930, before the company finally fell by the wayside. The car itself was designed by William J. Muller for the Budd Company of Philadelphia. Muller’s design was in some respects decades ahead of its time, as the Ruxton was the first production vehicle to use front-wheel drive in the United States. Archie M. Andrews, the largest stakeholder in the Budd Company, would eventually acquire the rights to manufacture the car, which he did under the New Era Motors banner. Only about 96 units were produced, 19 of which still exist today. This particular car is considered by historians to be the first sedan, as well as a popular show model that appeared in many photos of the era.

The reason this particular car was used at so many shows probably has to do with its insanely awesome livery. In an effort to draw more attention to the Ruxton models, the automaker decided to adopt a unique graduated livery written by Broadway set designer Joseph Urban. The large horizontal stripes in different shades gave a more stylish look, visually making the car longer and wider. The paintwork of this car was touched up in a previous restoration, but the theme is the same as when this car was initially produced. Other exterior tweaks include the popular Woodlite headlights and a redesign of the hood. Inside you see a renewed blue fabric interior, which matches the exterior colors nicely. Restoration work has progressed in years, but it was originally good enough for this car to take home a class win at the Pebble Beach Concours d’Elegance in 1980.

This 1929 Ruxton Model A Sedan will cross the block at RM Sotheby’s Monterey Auction, taking place between August 18 and 20. The auction house estimates the car will take home between $200-275,000, which could be worth just looking at the thing. 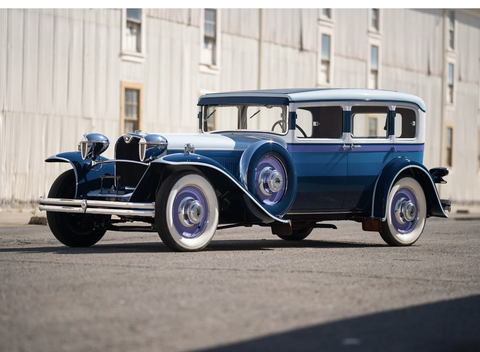