BMW has not had a top-class sports car since 2000, the year in which the V12 LMR, which won the 1999 24 Hours of Le Mans, was retired. It’s been 22 years of racing Formula 1, GT cars and the DTM, but BMW is finally back. This is the car that will lead that charge.

This is the first look at the BMW M Hybrid V8. It was designed by BMW Group Designworks to bring the aesthetics of the modern BMW to the company’s first purpose-built prototype in decades, which it does through a Hofmeister kink, a unique performance twist on the brand’s signature twin running lights. and a particularly aggressive pair of kidney grids.

BMW says the test color was designed in part to hide the details of some of the design, but the huge kidneys dominate the look in a way that should carry over to the final car in its final scheme. While they may fit awkwardly on many street cars, they fit into this design in a striking way that is unlike any sports car race today. 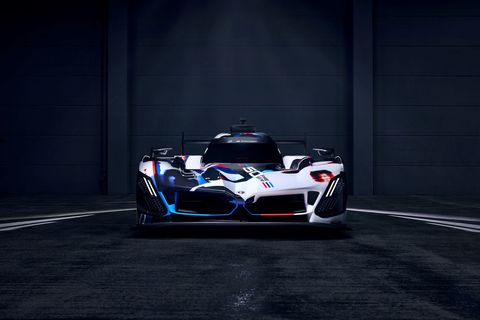 The brand had previously revealed that the car would be powered by a twin-turbo flat-plane V-8 built on architecture previously used in DTM from 2012 to 2018, which is coupled with a hybrid system standard for the LMDh ruleset, which the rules state will combine for a maximum of 697 horsepower which can be reduced for balance-of-performance purposes between events.

BMW’s LMDh Challenger is built in conjunction with Dallara, whose next-generation LMP2 fairing will also be the first building block of Cadillac’s 2023 racer. Both also share the same hybrid unit, but separate designs, engines and development plans mean most similarities end there. In addition to the Cadillac, LMDh-spec cars from Acura and Porsche are also confirmed for the first year of the newly renamed IMSA GTP class. If another manufacturer shows interest, cars built according to European Hypercar rules will also be able to compete in that category. 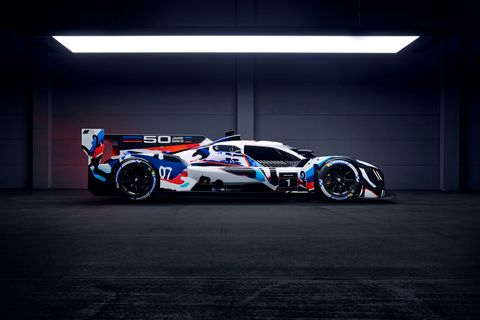 BMW has already announced that the M Hybrid V8 will be deployed by Rahal Letterman Lanigan in the IMSA 2023 season. Rahal has long campaigned for BMW’s factory-backed GT cars in both IMSA and the American Le Mans Series it replaced. It is currently campaigning for an M4 GT3 in the GTD Pro class. No plans have yet been announced for Europe, meaning that while the M Hybrid V8 is eligible to fight for overall victory at the 24 Hours of Le Mans, it is not officially scheduled to compete in that race yet.