Two days of riding the Lyriq on Utah’s mountain roads revealed a promising start to what will be big changes for the brand. An industry-wide switch to electric power and Cadillac’s commitment to be one of the first to go all-in could, if done right, provide an opening for the American luxury brand to move forward.

The electric turnaround begins with the Lyriq, an electric crossover SUV with a starting price of around $60,000. It’s the best crossover SUV Cadillac has ever made, but that’s not saying much to be honest. Crossover SUVs, for some reason, have never been Cadillac’s best thing, even though they’ve been the hottest item in the industry for nearly 20 years. Cadillac’s crossovers, aside from their sharp exterior designs, seemed largely ordinary compared to luxury rivals. Cadillac has been much better at making compelling cars and of course the hulking Escalade, a luxuriously appointed truck-like SUV. Still, Cadillac is pitted against established German luxury brands such as BMW and Mercedes and has generally been competitive at best, when it comes to giving buyers reasons to try a Detroit brand, perhaps for the very first time.

From the outside, the Lyriq looks like a fairly typical crossover SUV, but with sharp edges and a low roofline. (Headroom indoors is fine, though.) When the sun goes down, the design really shines, literally. The “grille” is a solid piece through which light shines at night to create patterns that move as the SUV is turned on and off. Inside, intricate patterns in the doors are made of metal so thin that colored light — pretty much any color you choose — can glow through it at night.

Furthermore, the interior is elegantly designed with lots of patterned metal and a large curved screen that houses both the gauges in front of the driver and a touchscreen that both front occupants can reach. Fabrics and wooden surfaces look nice and usually feel good too. Unlike many other luxury electric vehicles, there are plenty of buttons and switches so the driver doesn’t have to dig through touchscreen menus for basic things like setting the air conditioning. Even the graphics are nicely detailed, like the temperature numbers that scroll and arrows that vibrate slightly when moved. 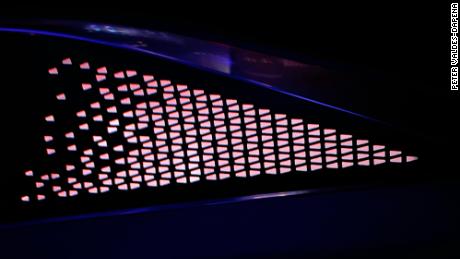 The only disappointments lie in the feel of some parts. The pull handles on the door allow you to feel the rattling gears underneath and the vent knobs look metallic but clearly feel plastic when in use. The door handles are also annoyingly clever. Rather than a simple pull to pull, to open the front doors I had to press a chrome lever-shaped button and then move my hand to pull a fin-shaped lever above it. The rear doors require a pull on the inner edge of the door where there is at least soft plastic.

With its flat floors and large storage bins, the Lyriq also makes great use of the extra space that electric vehicles offer thanks to their small engines and lack of transmission. There is no front box as GM designers said they wanted to pack electrical and mechanical equipment under the hood to make more room elsewhere. 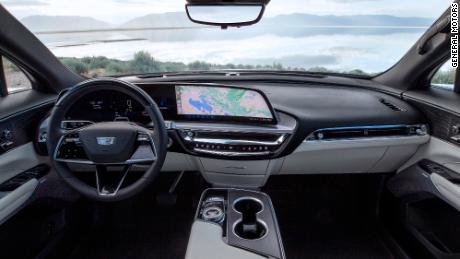 The shift to electric vehicles could provide the opportunity Cadillac needs to differentiate itself. The Lyriq really looks and drives like a luxury crossover. On the road it is smooth, controlled and quiet. Step on the accelerator and there is more than enough power. It skips without feeling rushed.

The Lyriqs GM delivered for test drives were among the first to be built. GM executives rushed to introduce the model, surpassing the original deadline by nearly a year, but some features won’t go into production until later. Four-wheel drive, for example, will not be available for several months as the additional front engine that will provide that feature is still being tested and refined. So the Lyriq I tested was rear-wheel drive. Likewise, GMs super cruise The hands-free driving system on the highway is still being tested for this model. It will be available later on new Lyriqs as they are assembly line build or as a software download for vehicles already in customer driveways.

Even without all the features and all the power that extra engine brings — the rear-wheel-drive Lyriq gets 340 horsepower from its one engine versus 500 from the twin-engine version — the Lyriq is a lot of fun to drive. As with most luxury vehicles today, the driver can select several “modes” that alter the throttle response and steering speed, plus of course the artificial engine noise. However, the firmness of the suspension cannot be changed. GM engineers say it responds automatically, using advanced fluid relays, to the needs of the moment, firming up when more body control is needed for turns, but softer at other times to absorb bumps. 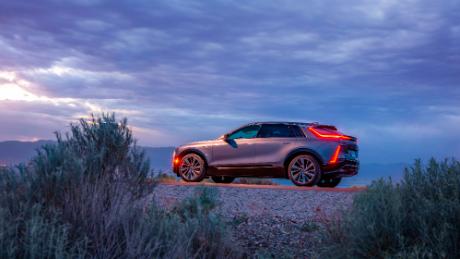 The Lyriq feels its best in Touring mode with everything at its most relaxed and languid. I mostly used Sport mode in my professional capacity – I had to test it – but I didn’t really enjoy it. The Lyriq feels faster in Sport mode and the steering is more responsive, but at high speeds through a bend it feels like it’s being asked too much of it. The body rolls a bit to the side and it generally feels like the SUV is steering faster than the rest of the vehicle is ready for. Yes, the Lyriq can go fast on a tight mountain road, but there are probably better electric vehicles for it. And as we know Cadillac’s history, there will certainly be future versions of the Lyriq for those interested in tight cornering.

In Touring Mode, the Lyriq feels at peace with itself. The steering feels quite nice, the ride is smooth and those twisty roads and tight corners, taken at a reasonable pace, make for a lovely afternoon ride. The electric motors are quiet and the noise canceling technology, nothing new but done very well here, absorbs things like tire noise.

If you think the Lyriq looks nice, GM designers say, wait until you see the Cadillac Celestiq unveiled next month. That all-hand-built electric car is expected to bring Cadillac back into the race with Rolls-Royce and Bentley, a market that Cadillac hasn’t served for a long time. This could represent a turnaround much more impressive than just switching from gas tanks to batteries.