James May teased the return of the Top gear gang in an upcoming special from The Grand Tour.

May will reunite with Richard Hammond and Jeremy Clarkson for an escapade in Norway as part of their Arctic Circle series.

The host shared a few details about the special, explaining that it will be “more serious” than previous episodes and adding that it will also focus more on cars, the trio’s area of ​​expertise.

“I can’t give too much away, but the next one is interesting because it’s actually quite heavy for cars,” May said radio times.

“We have three very interesting cars and a lot of stuff. I don’t want to scare you by saying this, but it’s basically a car show the next one,” he added.

“Someone said some of our specials are a bit like a travel show crossed with a sitcom I guess and the cars are almost there as an excuse or to provide comedy, but this one, which is coming up in Scandinavia, is quite a movie about serious car wars that just warns you.”

May also said he was thrilled that he and his co-stars had the chance to be in their element for this Scandinavian special. 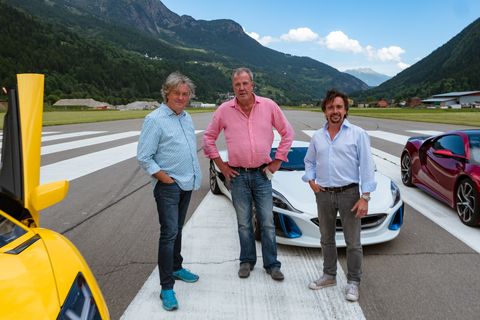 Related: The Grand Tour star Jeremy Clarkson explains why there are so many deleted scenes

“It was pretty fun since that’s what our background is and it’s pretty healthy for us to do every now and then,” he continued.

May is currently starring in the travel series James May: Our man in Italy and recently spoke of his desire to slow down, hinting at his potential retirement.

The Grand Tour will return later this year with a new season on Prime Video. James May: Our man in Italy streams on the same platform.