2021 saw the roll-out of the latest third-generation Tundra. We drove it and loved it, but wanted to take a closer look at how it performed off-road. So we flew to Calhoun, Georgia, to give the pickup a good workout on some more demanding trails. The combination of mechanical power and smart trail technology provided a comfortable and confidence-inspiring experience behind the wheel.

Toyota’s latest Tundra TRD Pro is a spaceship compared to the standard manual Ford Bronco we drove earlier this year. The 360-degree array of cameras outside the vehicle allowed me to get a taste of what lay ahead from the comfort of the cab. Not to mention other features like creep control and Multi-Terrain Select.

Creep control (essentially off-road cruise control) has come a long way since the systems in the early 2000s drove in a much more binary on-off way. It is available on TRD Pro and TRD Off-Road packages and works in conjunction with the Electronic Stability Control System (ESC) to keep the vehicle moving without spinning the wheels. While creep control is generally reserved for more technical obstacles, it worked a treat on some of the steeper and looser climbs where traction was limited. Even in the slowest environment (where momentum didn’t help me), it was able to reduce wheel slip and pull up some of the steepest climbs on the track – I’m estimating this at a speculative 30 percent incline.

Multi-Terrain Select (MTS) is much more active and adapts the vehicle dynamics to the terrain you are driving on. When active, it regulates wheelspin, brake pressure and throttle response to optimize traction in specific conditions – with different modes for mud, sand, stone and automatic. Sure, most of the course we were on could be tackled in 4-High, but it’s good to know the tundra can handle more demanding terrain should it arise.

Critically, the rear axle of the new Tundra uses coil springs instead of leaf springs. While the latter has been the industry standard for decades and can carry heavy loads, leaf springs tend to be rough like old bolts during off-road riding. Meanwhile, coil springs are much more compliant and can offer more articulation, making them better for off-road applications.

While none of the off-road park maneuvers forced the tundra to extreme amounts of articulation, compliance really shone on bumpy terrain. We never tackled any of the more demanding features, but the suspension was surprisingly smooth for a 6,015-pound truck. Coming from my extensive experience testing leaf-sprung vehicles off-road, the Tundra’s suspension feels relatively tuned for more high-speed work, but handles slow and stable four-wheel driving just fine.

With most modern pickup trucks prioritizing cabin space and comfort on the road, prioritizing off-road capability is becoming increasingly challenging. Just look at the big T’s custom set of Falken Wildpeak all-terrain tires, which are specifically designed and built for the tundra to reduce road noise and maximize fuel economy. You will find that you will not see the same tread depth as a standard set of Wildpeaks that you would find at your local tire depot.

I’m happy to report that the stock rubber was more than adequate for the off-road course I tackled. Conditions were relatively dry and I had a lot of traction without airing the tires. I crawled up some of the steeper sections and tried to go as slow as possible, forcing the truck to find traction on its own – momentum often allows you to cheat traction. Even without any of its advanced systems engaged, the tundra could get grippy and dizzying.

The elephant(s) in the room 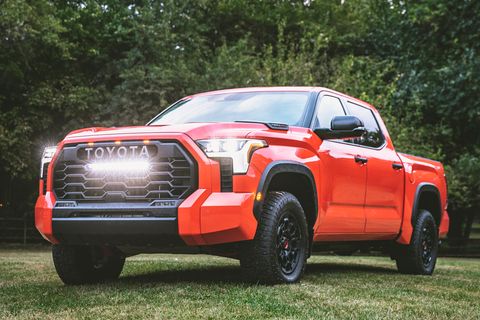 The grille on the front of the latest crop of half-ton pickup trucks seems to keep growing. And the Toyota Tundra is no exception. Since the Tundra’s debut, the large honking grille has been a hot topic of conversation, both for its aesthetics and its proximity to the ground. Looks can be subjective, but I’m happy to report that I never ran out of slack under the front end. To provide some perspective, the Tundra TRD Pro has a 26.2 degree approach angle, which is comparable to most half-ton pickups.

Enthusiasts also tend to bash the new Tundra because of the lack of restore points on the front. While part of me agrees that this is a bit silly, Toyota knows that the majority of buyers won’t take on anything more difficult than Starbucks’ drive-thru. That’s not to say there are undoubtedly aftermarket options. Toyota has already shown a preview of what these mods could look like with its “desert huntingconcept.

Should you take the latest Tundra TRD Pro off-road? Absolute. It’s one of the most capable half-ton pickup trucks we’ve driven on dirt roads. It just felt like he was in low-earth orbit as he tackled some of the more challenging obstacles in the off-road park.

While the Tundra was super capable in stock trim, slight tweaks — like firmer tires, high-clearance bumpers and a lift kit — will just make it unstoppable off-road.