Hiroshi Tamura is a real enthusiast. The ‘Godfather of the GT-R’, also responsible for Nissan’s new Z, has his priorities in order. I know this because he won’t tell me the zero to sixty of the new Z under direct questioning. “Circumstances will determine this,” he says. “We’re more concerned with being a willing dance partner.”

Honestly, this is the best non-answer to a question like this I could have asked.

It takes a real driver, a real enthusiast to give input. To pay attention to those special details that can make or break the way a person interacts with a machine. Good inputs can make up for all sorts of shortcomings in dynamics (hello, B7 Audi RS4!), and vice versa, bad inputs can ruin the good job dynamics do (Tesla Model S).

I once bought a 2005 Audi S4. It was a beautiful car, with a V-8 engine, a comfortable interior and impeccable highway manners – perfect for commuting through New York’s tri-state area. It has helped me a lot as it was the demonstration for the dealership owner for a few months and a few thousand miles on the odometer translated into real savings. Objectively speaking, it was a good move to buy it. But I could never love it and sold it a few months later. Why? It had the basic four-spoke steering wheel, which I didn’t like to grip, rather than the optional three-spoke unit that came later. Some people would think I was crazy for selling a $45,000 car for something relatively small. But a true enthusiast would hear that story and nod.

During part of the pre-drive presentation where Tamura-san points out the “retro-future” elements of the new Z, he casually mentions something that’s stuck in my head ever since.

There’s the front with its large, square mouth and headlights reminiscent of the 240Z – a front that only really makes sense when you run into your rear-view mirror and it seems only like a futuristic 240Z. There are the taillights, which are reminiscent of the Z32 300ZX, but with a very 2022 amount of LED “depth”. Both elements are cool, but what stands out is the small connection to the greatest Nissan in history: the R32 Skyline GT-R.

The R34 is arguably the most valuable, collectible and best performing of the ‘analog’ GT-Rs. In my opinion it is also the most beautiful. But it was the R32 that was so good it was banned from racing. It was the R32 that made me and my friends say “no Skylines” when they race each other in Gran Turismo 1 — it was too good. Even today, when you’re building a high-performance Skyline, the R32 is the lightest, the purest of the bunch.

“We’ve noticed in Japan,” says Tamura-san, “that a lot of people modify their R32 Skyline GT-Rs like they modify all other sports cars. Many people, when they modify their cars in Japan, will change the steering wheel. But not.” the R32 Skyline Most people, even the tuner companies, leave the stock wheel alone, because it is perfect. 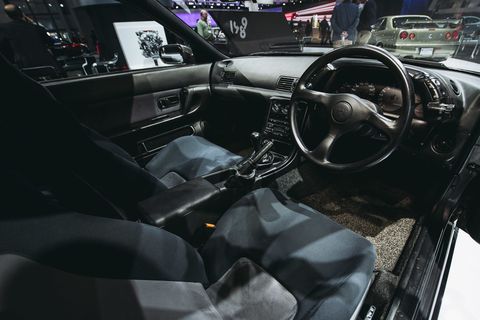 As a former R32 Skyline owner, I can’t help but nod in agreement. That handlebar was, in fact, as perfect as any handlebar has ever been. Just this past weekend I drove the $450,000 Built by Legends MINES R32 GT-R, and the steering wheel remained stock, save for a suede reupholstery. I’ve changed the steering wheel in my C5 Corvette, Fox Body Mustang and Safari Porsche 911, but not in the Skyline. It didn’t need it.

“That’s why we made the new Z steering wheel the same. Of course there must be buttons for functionality. But the size, diameter, shape and circumference are all identical to the R32, and we even put the finger grips on the back like the R32.”

And he should know – Tamura-san’s weekend ride is a beautiful R32 GT-R, which he bought new and at one point produced over 800 horsepower. He turned it back, he says, for balance and handling. And he made sure that this excellent detail, the perfect driving input device, was incorporated into the new Z. 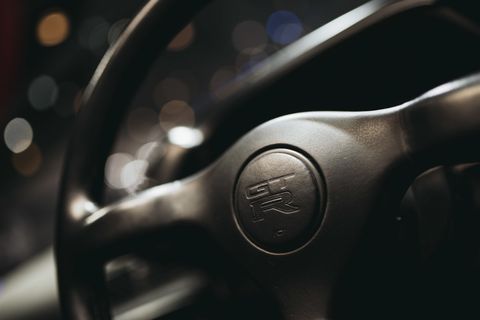